Many of you have seen the traveling exhibition Jurassic Quest come through your area on occasion. It usually visits my area near Dallas, TX sometime in mid-summer, and sets up shop in one of the local convention centers. Now, with the Coronavirus pandemic still ongoing, they would have some difficulty presenting their exhibition in the usual manner. In order to protect their patrons, Jurassic Quest decided to change things up this year by turning the show into a drive-through experience at the Texas State Fairgrounds instead! Jurassic Quest has since moved on from Dallas, but it will be making its way around the U.S. in the coming weeks. While I’m sure there will be minor differences according to venue, the basic experience should remain roughly similar at each location. (Note: this attraction has some similarities to but is distinct from certain Jurassic Park themed events, such as Jurassic World: The Exhibition.)

Patrons purchase their tickets ahead of time, and scan their tickets upon arriving at the exhibition. To enhance the experience, Jurassic Quest has produced an audio tour exclusively for the drive thru experience that guests can play as they drive along. In case other cars back up, the narrator helpfully suggests pausing at certain points, though if your phone (or whatever other device you’re playing the recording on) accidentally resets or refreshes (which happened to us), it can be difficult to get back to the spot where you left off. I would suggest a more playlist style of the audio tour for future incarnations of this event.

The tour proceeds roughly chronologically, starting with a brief Triassic scene before moving on to the main show in the Jurassic and Cretaceous. I found the accuracy of the animatronics a bit mixed, with certain species seemingly carelessly assembled from their various pop culture incarnations. Most of the feathered dinosaurs fared the worst, with many of them sporting the “tarred and feathered” look, as many an exasperated paleontology enthusiast has referred to it (though this isn’t as much of an issue for more primitive dinosaurs like Yutyrannus, which would have had shaggier feathers anyway). I found myself impressed by other models, however, especially those based on more recently discovered species such as Titanoceratops and Siats (see above). Prehistoric sea creatures fared rather nicely as well, especially as it seems surprisingly easy for many similar companies to screw them up in odd ways. Jurassic Quest clearly considered the appearance of their marine life with great care.

Speaking of marine life, though it lived after the age of dinosaurs, Jurassic Quest also features an impressive Megalodon model, based closely on the Great White interpretation of the fossil evidence. As far as I can tell it’s about the right size for a full-sized Megalodon, which really helps impress upon visitors how big these monsterous sharks really could get. 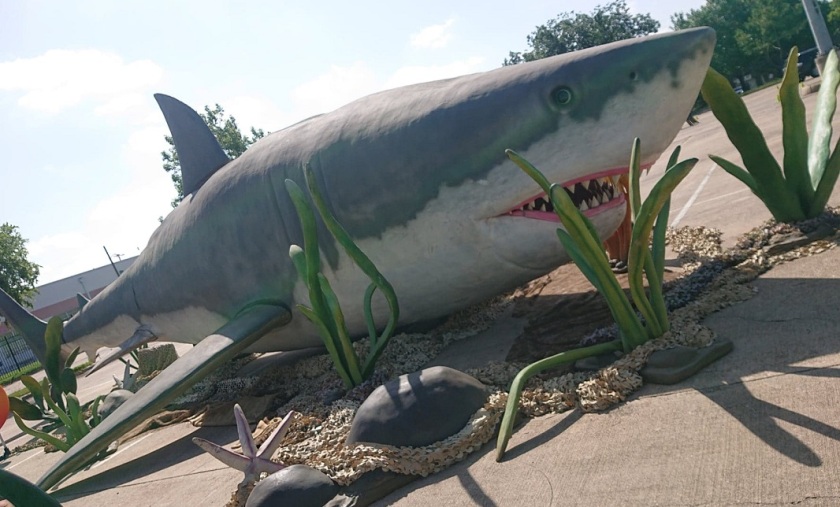 At the end visitors can park their cars and get their picture taken next to a pair of tyrannosaurs: T. rex itself and a Qianzhousaurus, the latter of which is the star of the book Pinocchio Rex that I reviewed a while back. Unfortunately, in addition to being rather washed out, old Pinocchio Rex got cut out of our photo, so I’m glad we didn’t have to pay for it. As least I got a picture of our party?

I’ve felt rather tempted to check out Jurassic Quest whenever it comes through the Dallas area, though I’ve been hesitant to pay for the full price tickets in previous years (in the range of $20-$25 per person for basic admission). Since the drive thru experience charges per car, and comes to $50, it’s pretty easy to get your money’s worth if you split the cost with a car full of friends. I went with my two boys and my friend Diane from the Dallas Paleontological Society, and we all had a great time!

I’m still a bit on the fence about whether the full experience of non-pandemic times would be quite worth the cost, though I’m sure there are plenty more activities to occupy visitors during the usual walk-around experience. I know dig pits and dinosaur rides of some sort are part of the usual experience, so perhaps I’ll have to give it a chance next year. In the meantime, the drive thru experience has moved on from the Dallas area, but it has several more destinations planned for its touring season. Visit the Jurassic Quest website to find out if it will be passing through your hometown anytime soon. It’s a great way to get out of the house for a couple hours of escapism during this time of social distancing!

If your visit has you or your little ones interested in learning more about paleontology, check out some of my other reviews! Prehistoric Pets will make a fantastic gift for any little ones bit by the fossil bug. For more dinosaur themed attractions in the north Texas area, consider visiting Dinosaur Valley State Park, the Heard Natural Science Museum, The Whiteside Museum, Texas Through Time, or the Mayborn Museum. For your listening pleasure while you drive to these attractions, I’ve gathered together some of the prehistoric-themed music of The Ratfish Wranglers, The Amoeba People, and Professor Flint. For a general dinosaur encyclopedia, I recommend Dinosaur Atlas. For more about Megalodon and other prehistoric sharks, I recommend Paleo Sharks, Discovering Sharks, and the Sharks and Other Sea Monsters Pop-Up Book. For anyone interested in pursuing their own fossil career, I recommend Fossils For Kids as a great starting point. The Coloring Book of (Scientifically Accurate) Paleofauna and Prehistoric Life in the National Parks coloring book are some of the best coloring books out there. If you’re just looking for a bit of fun at home, Zniw Adventure is an entertaining adventure game in the old Lucasarts/Telltale style, and the Battat Dinosaurs 5-Pack can’t be beat for bargain, scientifically accurate toys.