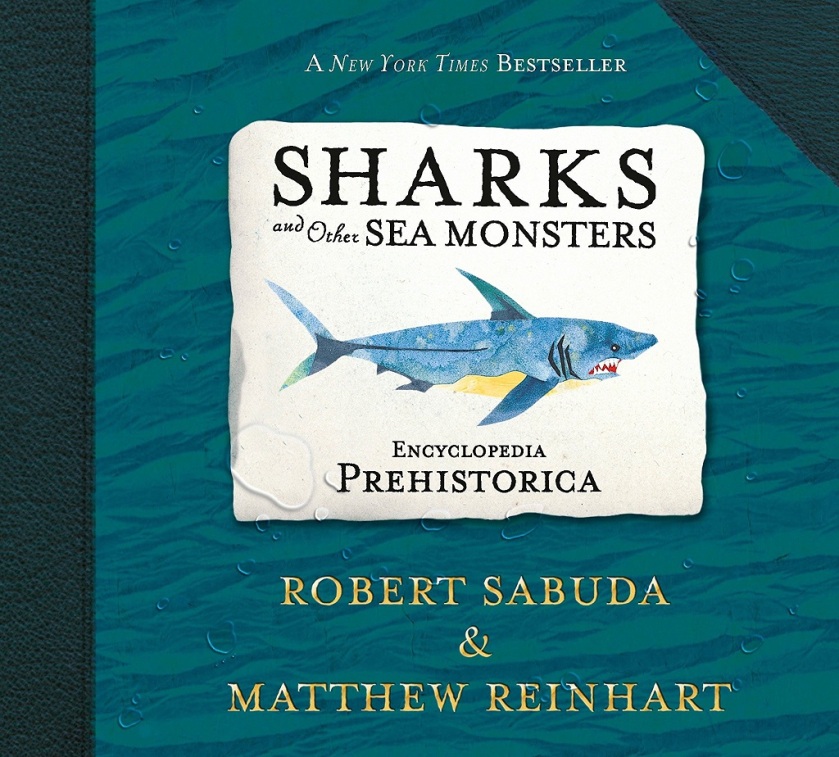 I had meant to release this a few days earlier and so capitalize on the yearly Shark Week craze a little more effectively, but life (and especially children) get in the way, so here we are! While Discovering Sharks and Sharks: A 400 Million Year Journey both focused exclusively on sharks (or at least shark relatives), today’s book uses sharks as the hook to get readers interested, and then introduces them to all sorts of other interesting sea creatures as well. Created by Robert Sabuda & Matthew Reinhart, Sharks and Other Sea Monsters makes full use of the potential of pop-up books to expose readers to the fascinating sea life of ages past. This book forms part of Sabuda & Reinhart’s “Encyclopedia Prehistorica” trilogy, alongside Dinosaurs and Mega Beasts.

This book packs in a lot of activity in its pages. Not only does each page feature a large set piece bursting from the center, but numerous flaps around the edges contain their own smaller pop-up displays as well.

One of my favorites among these flaps unfolds to reveal an early Paleozoic shoreline, featuring the first tetrapods crawling crawling about in the swampy shallows. I really got to hand it to the creators of this book; they managed to create a rather convincing effect with the waterline! It doesn’t come across as well in pictures, but when one has it in hand, the water effect is quite pleasing, especially with the amphibian half-emerged onto the shore!

Of course, no book about prehistoric sea life would be complete without the mighty megalodon, which naturally lunges from the page to delightfully menace the reader! As entertaining as the is, I particularly appreciated the large flap to the right of this toothy monster. The inside and outside of the flap introduce the readers to various weirdos of the general shark lineage from throughout prehistory, including Stethacanthus, Xenacanthus, and my favorite, Helicoprion, which I never pass up a chance to talk about. The latter unfortunately shows up in its older reversed tooth whorl version, but it’s still nice to see it included as a pop-up piece!

There’s so much more pack into this book I’d love to share, including a giant sea scorpion, a bit on whale evolution, and a Journey to the Center of the Earth style duel between a plesiosaur and a mosasaur, but in the interest of leaving something for the readers to discover for themselves, I shall reign myself in and conclude with one last page. A giant Kronosaurus skeleton takes center stage, expanding impressively beyond the borders of the page, while Mary Anning and her ichthyosaurs get two whole side flaps to themselves. It’s always nice to see actual paleontologists receive acknowledgement in kids books, especially someone so important to the development of the discipline as Mary Anning. There’s plenty of books out there about her fascinating life, and I highly recommend reading up on her. I’ve already reviewed several of them, of which Dinosaur Lady might be my favorite, so be sure to check them out!

I highly recommend Sharks and Other Sea Monsters to anyone interested in sharks, prehistory, or just pop-up books in general. Sabuda & Reinhart have produced a gorgeous piece of art with this book, and I always find it enjoyable to turn through. I’ll note for the sake of some of my more pedantic readers that many of the creatures may have odd proportions, but this is an inherent limitation of the medium, rather than any real error on the part of the artists. It makes for a wonderful accent to any book collection, though as with its Dinosaurs counterpart, consider carefully the maturity of any individual you allow to read the book. I myself only barely trust my four-year-old to read it with enough care to avoid damage to the pages! In any case, I certainly enjoy it enough for my own sake, and so I’m pleased to give Sharks and Other Sea Monsters the Dino Dad Stomp of Approval! For more about prehistoric sea life, check out my reviews of The Plesiosaur’s Neck and Sharks: A 400 Million Year Journey.