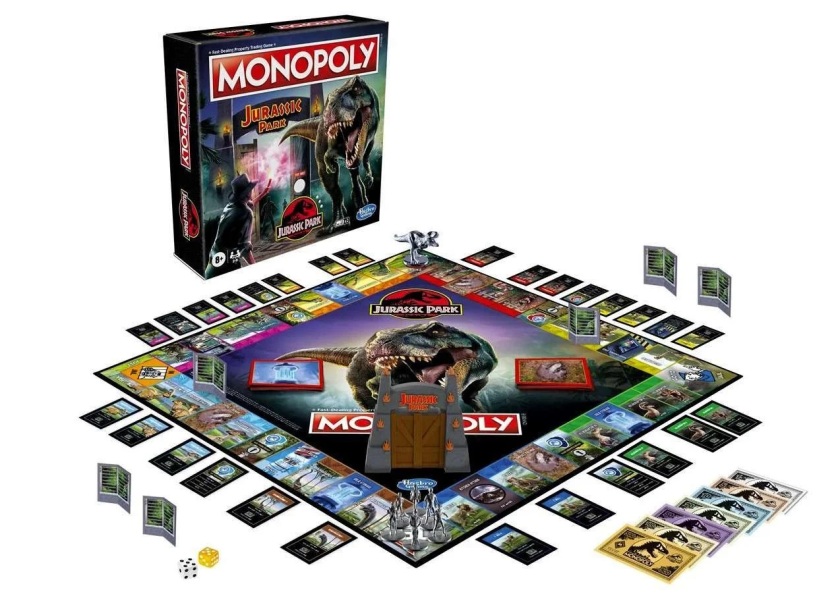 While at my local big box store (which I find myself shopping at more than I care to admit), I happened to notice some Jurassic Park themed merchandise in the clearance section. Upon closer inspection I discovered a copy of Monopoly: Jurassic Park Edition among the store’s cast-offs. Though many like to joke about the frustrating nature of basic Monopoly, my kids are at the exact stage in life where people tend to enjoy it most, so I bought it on an impulse. It turned out to be a good impulse, though, as this version shakes things up a bit, bringing in a few extra dynamics that adds to the entertainment.

The game of course has a nice shiny coat of Jurassic Park theming applied to it. That’s the first movie, mind you. If I’m going to buy some licensed IP board game, it’s nice to have it themed after the original, universally beloved classic rather than one of the sequels. (Though it may be a cause of correlation vs causation, I think the versatility in adapting the premise of the original speaks to its strength. The Jurassic Park Little Golden Book also worked surprisingly well, for example.)

The typical Monopoly shoe, hat, etc. are swapped for pewter figurines of the main cast. Dr. Grant, Dr. Sattler, Dr. Malcolm, John Hammond, Lexie, and Tim are all included, as well as a Tyrannosaurus rex, though the latter isn’t meant as a player piece. The money of course has the Jurassic Park logo on it, and the various properties have been replaced by dinosaur exhibits and other JP facilities. Finally, a recreation of the Jurassic Park tour gate plays either the main theme or a T. rex roar when pushed, which players do whenever they pass “Go”.

The unique visuals of course are merely typical “(Intellectual Property) Monopoly” fare. The game does actually introduce a new twist on the standard Monopoly gameplay with some new Jurassic Park inspired game mechanics. While players move their own characters based on the total value of both dice rolled, the number on the “Amber” die determines how many spaces the players must move the T. rex figurine along the board. Anytime old Rexy lands on a space, it becomes “damaged”, represented by flipping its corresponding property card upside-down next to it. Any damage results in an extra fee for the player who wishes to own it. When a player owns a property space, they can put up fencing, which will the T. rex will destroy rather than the property itself, and owning a full set renders it immune to further tyrannosaur attacks. Additionally, when passing “Go”, players hit the button on the Main Gate piece. If they hear the Jurassic Park theme, they can collect the typical $200, but if they hear the roar of the T. rex, they may only collect $100.

While I am ambivalent about standard Monopoly, I found that the unique features of this Jurassic Park edition breathe a bit of new life into the game, and my boys absolutely love it. While we’ve played the game as intended a few times now, they have recently taken to simply playing with the pieces and making up little stories as they chase each other around the board. I’m not quite sure Monopoly: Jurassic Park Edition deserves my full “Stomp of Approval”, but if you can find it at a discounted price, I can comfortably recommend it for a casual game night.

For more Jurassic Park themed content on my site, you can of course check out not only my afore-mentioned review of the Jurassic Park Little Golden Book, but my review of the first season of Jurassic World: Camp Cretaceous as well. Additionally, I have come into an opportunity to attend the press preview night for upcoming Jurassic World live exhibition, which looks vaguely similar to (though with a much higher production value than) the Jurassic Quest program I attended last year. Keep an eye out for my report on that event in the next couple weeks!