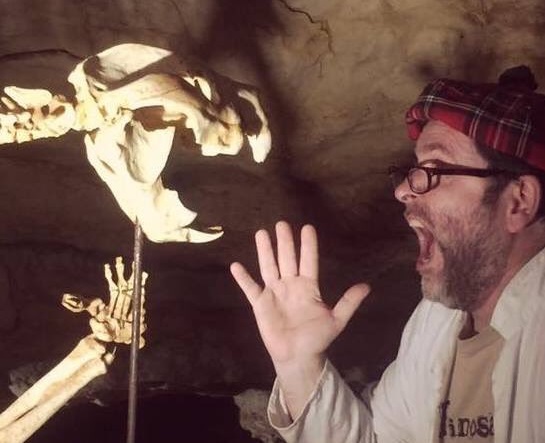 It’s been a while since my last Primeval Playlist post, so I feel it’s high time for another. Today I’ll be introducing you to the work of Professor Flint, an Australian Scot science communicator who performs music about prehistoric life, often focusing on local Australian megafauna. Professor Flint makes numerous live appearances at museum events and other similar programs, entertaining kids with his lively songs, though any fan of prehistory will find something to enjoy in the Professor’s discogrgaphy. I’ve shared a few of my favorites for your perusal from the albums Dinosaurs Down Under and Dinosaurs Amongst Us. Give them a listen and purchase them for you and your kids! 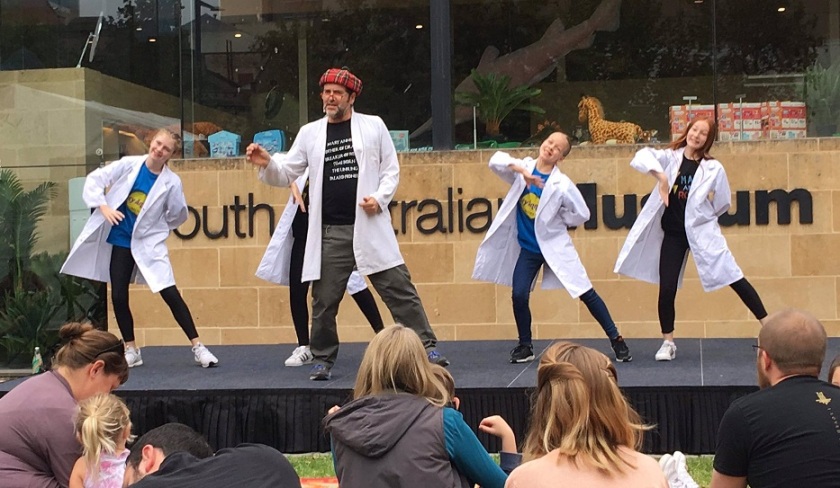 I probably won’t do this for every new Professor Flint song, and indeed I didn’t even initially do it for this one, but the music video Flint released for Mary Anning’s 221st Birthday is so fun it deserves to be reposted wherever possible. Thus I decided I just had to come back and edit it into this blog post! Show some love for the Mother of Paleontology and give it a watch:

I Wanna Be a Palaeontologist

This is the song that inspired me to write this post at this particular time: one of my friends recently got back from a trip to Scotland, and brought me back some fun Loch Ness swag. This got me humming “I Wanna Be a Paleontologist”, which takes much of its inspiration from Professor Flint’s Scottish background. It even includes a verse about old Nessie, and how she reminds him and others of real prehistoric animals. I particularly enjoy it as a fun counterpart to They Might Be Giants’ “I Am a Paleontologist“.

Blobs in the Rocks

Forget life before the dinosaurs, I bet you never expected to hear a song about life long before any complex organisms, huh? This song celebrates the often overlooked, er, blobs in the rocks that record the evidence of the simple lifeforms that quietly flourished before the Cambrian Explosion (during the Cryogenian and the Ediacaran, specifically, if you’re curious). For a subject that many casual paleo enthusiasts might consider somewhat boring, the song manages to be quite the earworm. I catch myself singing this one more often than any of Professor Flints’ other songs.

I would hazard a guess and say that this is probably the Professor’s most well-known song; it even gets a mention in Anthony J. Martin‘s excellent book Dinosaurs Without Bones, though sadly not by name (an error in dire need of correction for the second edition)! In any case, it happens to be the first Professor Flint song I ever personally heard, long before I realized he even had any other songs, much less full albums! I had it in my head that I found it via the old version of Love in the Time of Chasmosaurs, but if I did, I can’t find it now. In any event, I’m pretty sure this is the video I saw, though there’s a more recent one the Professor shot on location at the actual fossil site the song references! Speaking of which, this song is also responsible for first introducing me to Dinosaur Stampede at Lark Quarry, so I think we can consider this tune a definite sci-comm success!

This one has definitely proved a hit with my kids, as I’m sure it has with anyone who has heard it! Who doesn’t enjoy a bit of potty humor as a bit of a guilty pleasure on occasion? You can even assuage your conscience with its educational value! Speaking of educational potty humor, I’ve mentioned my involvement with the Paleontology Coproliteposting Facebook group on this blog before, and if they don’t immediately adopt this song as their official anthem, then I truly don’t understand any breed of human.

Look at That a Whatsiznameasaurus!

This one goes out to all you parents out there who have ever had difficulty keeping up with all those wacky dinosaur names your child keeps bringing home! I mean, I’ve never had that problem (he says smugly), since I was that annoying kid, but I can’t help but love the song nonetheless. It’s pretty catchy!

There’s nothing really prehistoric themed about this one, other than the fact that birds are dinosaurs. It’s just a delightful good morning song that never fails to make me smile!

I’ll probably slow down the webpage or something if I embed too many more songs here, so I think I’ll wrap this up for now. As I said, these are just a few of my favorites, Professor Flint has many more fun songs to listen to. There’s a lot more songs about Australian fossils than I’ve shared here; check them out if you’re curious about the fossils of the Land Down Under! (I’m partial to Invictokoala myself.) I can personally attest that this music most definitely appeals to kids of any age, up to and including nerdy big kids like myself! You can purchase Professor Flint’s albums  on Amazon and iTunes, and you can also find them on Spotify as well. You can also follow the both of us on Twitter and Instagram, so be sure to follow us if you haven’t already!