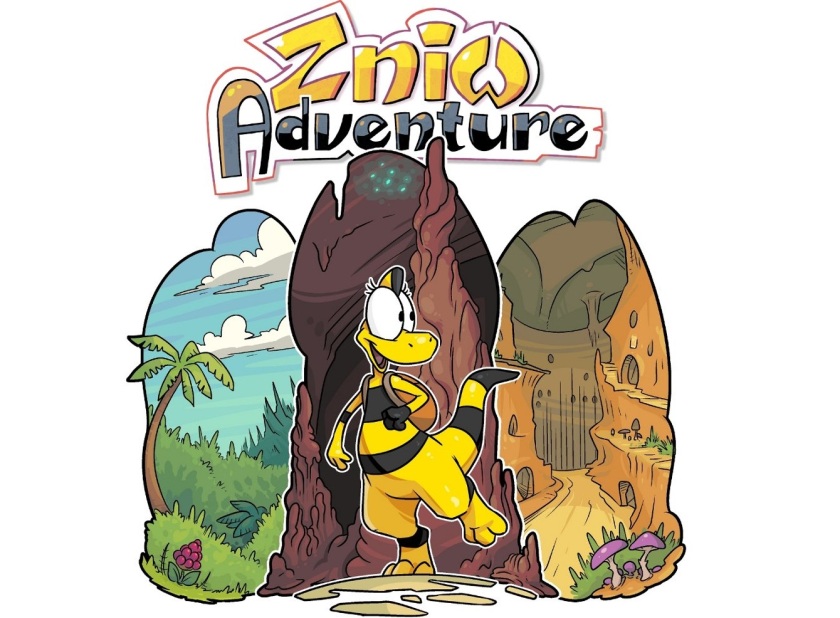 Not long after joining Twitter, I discovered indie video game duo, Karolina Twardosz & Łukasz Mikołajczyk, who were in the midst of developing a prehistoric adventure game by the name of Zniw Adventure. Of course, the dinosaur theme immediately captured my attention, and I eagerly followed its development. Now that it’s out, I finally have the opportunity to present it here!

As I mentioned previously, Zniw Adventure is a classic point and click adventure game, of the sort made famous by Lucasarts or Telltale Games. Set in a world of mostly-civilized dinosaurs (not unlike the sauropod kingdom in The Adventures of Padma and a Blue Dinosaur), players assume the role of a plucky ornithopod named Zniw (pronounced in the Polish fashion as “zniff”). While searching for some shiny pebbles for her mother’s “hatchday” gift, Zniw wanders too far from her hometown, and becomes lost in the nearby woods. Players must help her find her way back home, navigating through one crazy detour after another.

I had a fun time puzzling my way through; it feels quite satisfying when sudden inspiration hits and the way forward suddenly becomes clear. Conversely though, the usual hassles of adventure games apply: as with all such games, there will inevitably come a point where you’re simply not in the same headspace as the developers, and get stuck for an hour trying to figure out what arcane combination of items and actions will allow you to progress. Often these turn out to be something simple that feel obvious in retrospect, though I admit I resorted to a walkthrough on one or two occasions.

Zniw Adventure carries players through a lush Late Cretaceous environment, with an intriguing story that gradually layers on detailed but unobtrusive world building. There’s plenty of characters who seem to have deeper stories, and hinted-at locations that don’t appear in this installment which would definitely plenty of fertile ground for a sequel! An encyclopedia automatically fills out as players progress through the game, providing more details on the plants, animals, locations, and even a glossary.

The game has a bright, cartoonish art style, with varying degrees of stylization. If I may make the comparison, the design choices reminds me somewhat of the PBS cartoon Dinosaur Train, in that the characters closest to the plot have the most cartoony look to them, while more peripheral characters tend to be rendered in a more “anatomically rigorous” style (as the paleoartists call it).

I enjoyed Zniw Adventure, and I’m sure fans of adventure games will as well. I recommend it to anyone looking for a good, wholesome, engaging dinosaur fun. I hope to see more from Karolina Twardosz & Łukasz Mikołajczyk someday soon! For now I’m pleased to give this my Dino Dad Stomp of Approval. You can purchase download it for yourself here via Steam. For some more video games, check out my reviews of paleo-meme-inspired games THE BIG DIE & Lemme Splash!