As a dinosaur obsessed youngster who grew up in a creationist home, I first learned about the Paluxy River dinosaur footprints at a very young age. The context, of course, concerned supposed evidence of humans and dinosaurs living side by side once upon at time, only a few thousand years ago. This claim has since been thoroughly debunked, even by Ken Ham himself, though a few of the fringiest creationists still cling to the idea.

Of course the story doesn’t end there. As is often the case, the only reason creationists knew of the Paluxy footprints involved the well-publicized discovery of actual dinosaur tracks, among them the first known footprints left by long-necked sauropod dinosaurs. Roland T. Bird’s expedition garnered lots of attention, and the giant slabs full of footprints he sent back to the AMNH in New York have been seen by millions of visitors since then. I’ve long wanted to visit Glen Rose to see the footprints for myself, and in a happy coincidence, upon moving to Texas a few years ago I discovered that I only had to drive an hour away to do so! As a member of the Dallas Paleontological Society, the yearly “Fossilmania” event they put on in the Expo Center provided the perfect excuse to go on down. 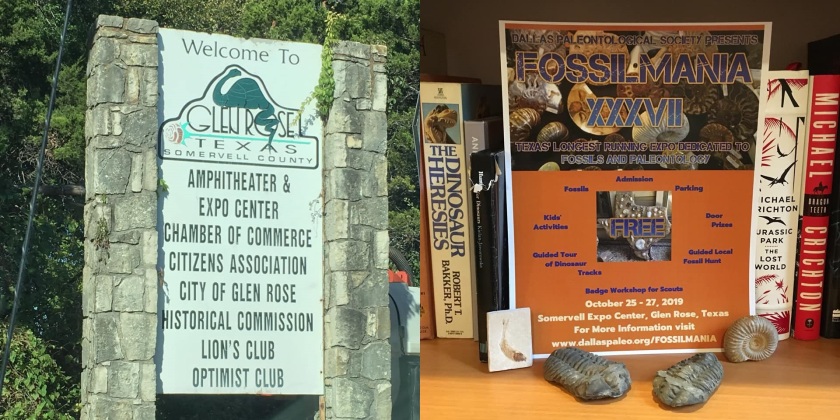 Fossilmania is largely a typical gem & mineral show (with a particular emphasis on fossils, of course), with activities and field trips to complement the vendors selling fossils and other souvenirs. My boys had a great time with the kids activities: my oldest enjoyed a fossil matching involving two lead wires that would light up a little bulb when he got a match, and my youngest got very serious about the cupcake tin digkits with real fossils inside!

One of the highlights is a field trip to nearby Dinosaur Valley State Park, part of the Texas State Park system, which protects all the main tracksights currently exposed by the Paluxy River. A certain type of paleonerd will be very excited to see the dinosaur statues that greet visitors immediately after paying admission at the park ranger station. The old-fashioned Brontosaurus and Tyrannosaurus statues hail from the famous Sinclair Dinoland exhibition of the 1964 New York World’s Fair (itself among the most highly regarded World’s Fairs in history). There were simply purchased at the time as placeholders for the actual dinosaurs that left their prints in this area, generally believed to be Sauroposeidon/Paluxysaurus (a relative of Brachiosaurus) and Acrocanthosaurus (a ridge-backed relative of Allosaurus). Of course, there’s too much history behind these two models to do away with them now, and so here they happily remain as historical monuments to the paleoart of years past.

The footprints are the real attraction of the park, of course, and there are several sites at which visitors can view them. It’s great fun wading through the water or hopping across the stones to find the great slabs that contain these records of prehistoric time, and I could personally spend all day just relaxing in the river alone. I fully intend to take advantage of the camping sites at Dinosaur Valley one of these days and make an entire weekend of it.

I made a pleasant discovery while making a pit stop at the ranger station on our way out at the end of the day. Inside the building at the park entrance, one can find a mini museum that occupies a small room with lots of extra info on the dinosaur tracks. The centerpiece of this exhibit features a slab of genuine Paluxy River dinosaur footprints, with skeletal casts of actual dinosaur feet set within them in a lifelike, if rather disembodied, manner. A painting and a sculpture on display depict another famous claim about the tracks, that of the supposed “attack” on a sauropod by a theropod, though many now consider the evidence of this event only slightly less dubious than the supposed human footprints of the creationists. 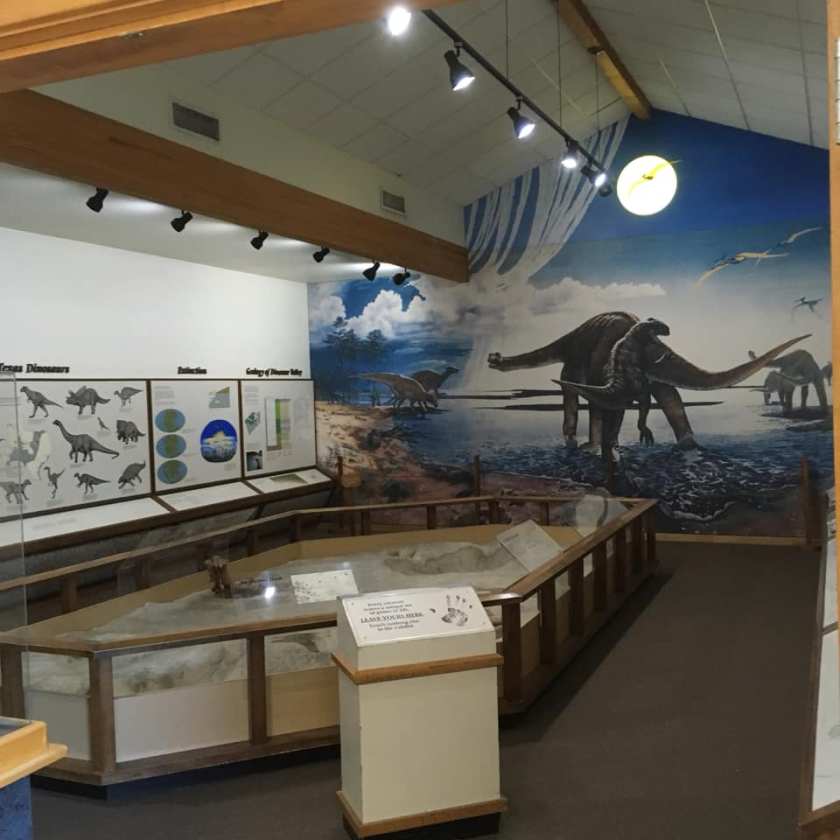 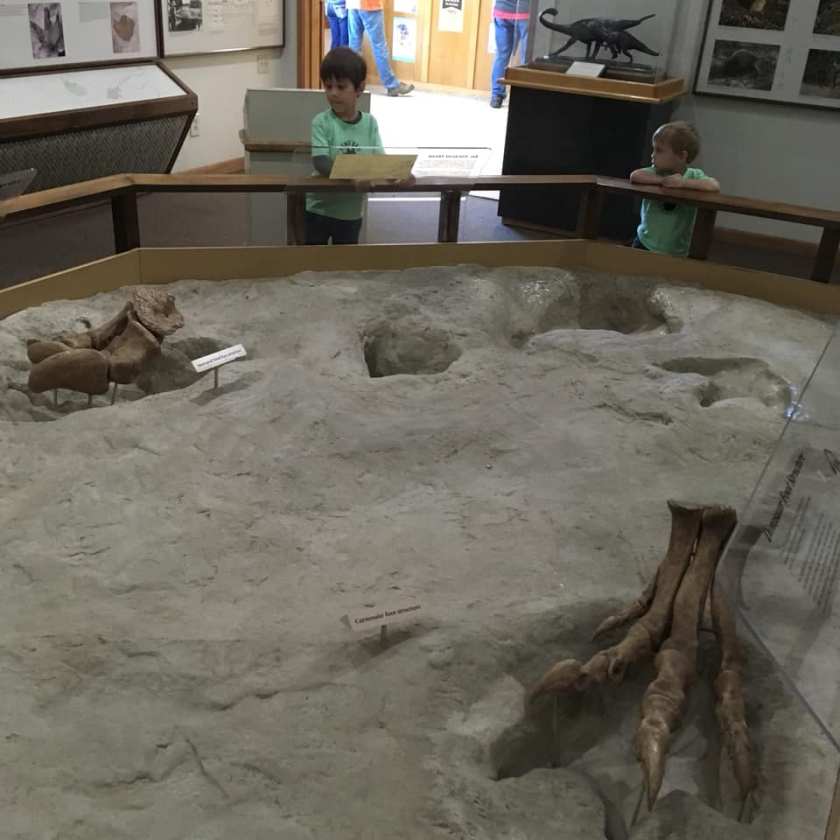 I highly recommend a visit to Dinosaur Valley State Park. I admit that with my interests and history I’m an easy mark for this place, but this place has a lot to offer even those relatively uninterested in the dinosaurs (as if such a person exists!). With a number of camping sites as well as hiking and horse trails criss-crossing the park, there’s plenty to keep the outdoor inclined busy. The nearby town of Glen Rose also has its small town charms to occupy tourists, and several nearby attractions stand as reason to visit in their own right. Chief among these is the Fossil Rim Wildlife Center, a drive-through safari-style zoo, with many interesting animals, including the usual African megafauna, as well as important breeding populations of endangered species like the Scimitar-Horned Oryx and the Attwater’s Prairie Chicken. If like many dinosaur enthusiasts you like to indulge in kitschier stuff as a guilty pleasure, a classic roadside dinosaur park called Dinosaur World sits not far from the main entrance of the state park (as does an unaffiliated creationist museum, if that’s more your style, though it’s one of the aforementioned fringe organizations disavowed by more established creationists).

Since book reviews are my usual schtick, I suppose I should include a few recommendations here! If this post has you in a mood to learn more about ichnology (the study of prehistoric footprints and other trace fossils), I can personally recommend both Anthony J. Martin’s Dinosaurs Without Bones, as well as the blog of ichnologist Lisa G. Buckley. Most relevantly to the topic of this post, I highly recommend Dinosaur Highway, a fascinating look into the history of this little corner of Texas. While Dinosaur Valley may be a State Park, its aims are certainly in line with the National Park system: for more books relevant to this topic, check out my reviews of Jason Chin’s Grand Canyon and the Prehistoric Life in the National Parks coloring book. For more Texas-based fossil attractions, consider checking out my reviews of The Whiteside Museum and the Texas Through Time museum as well!

It’s probably no surprise that Dinosaur Valley State Park earns my enthusiastic Stomp of Approval, but don’t let my obvious bias undersell the place for you! It makes for a genuinely enjoyable visit for any length of time, and has a little something for everyone. If you ever find yourself in the Dallas/Fort Worth area of Texas, be sure to take an easy hour’s drive south to visit this historically and scientifically important local gem!