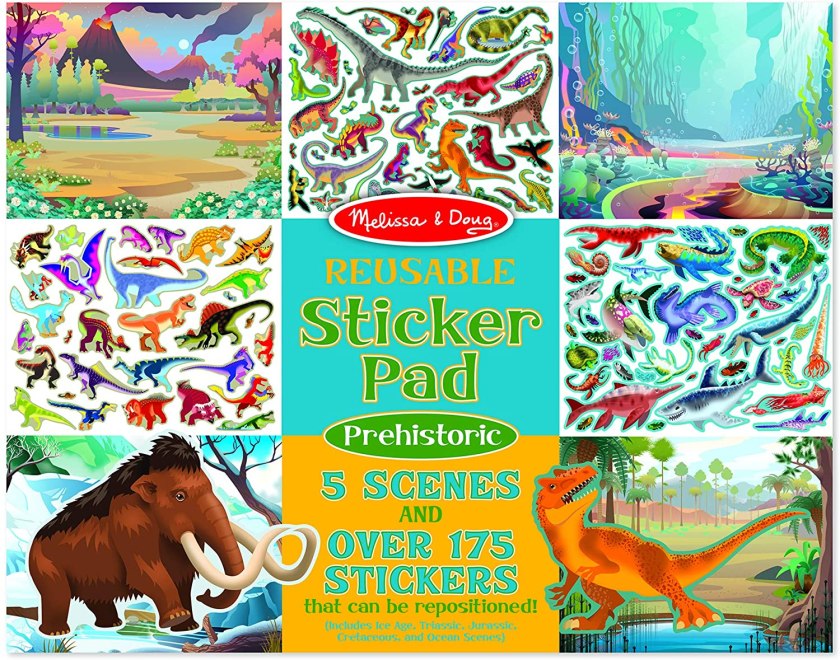 It’s been a while since the last time I featured a sticker activity! Today we’re taking a look at the prehistoric themed reusable sticker pad by children’s toy & activity manufacturer Melissa & Doug, who also made Poke-A-Dot! Dinosaurs A to Z. Previous sticker activities I’ve reviewed so far have had a particular structure to them. The Build Your Own Dinosaurs Sticker Book allows one to… well, build a dinosaur out of various sticker parts. The Children’s Dinosaur Atlas includes stickers as more of a supplementary feature, but their use takes on almost a sort of “seek & find” aspect.

The Melissa & Doug Prehistoric Reusable Sticker Pad by contrast is much more of a freeform activity. The pack includes five different scenes depicting different prehistoric environments, with corresponding sticker sets to go with each one. The included sets are labeled “Prehistoric Ocean”, “Triassic”, “Jurassic”, “Cretaceous”, and “Ice Age”. Children are free to use the stickers in whatever combination they wish, with only the light suggestion of each scene’s name providing any particular direction on how to use them.

The “Prehistoric Ocean” set contains the entirety of the set’s representation of the Paleozoic, with trilobites, Anomalocaris, a sea scorpion, Dunkleosteus, and Helicoprion included. Another large, armored fish is included, but I’m not sure if it’s meant to represent Dunkleosteus’s cousin Titanichthys or the Mesozoic giant Leedsichthys. However, this set does not confine itself to Paleozoic seas, with coelacanths, mosasaurs, plesiosaurs, ichthyosaurs, and even the early whale Basilosaurus included as well.

Dinosaurs have an outsized place in the public’s mind, and so it should come as no surprise that Mesozoic scenes dominate the overall set. The Triassic scene depicts an apparently arid yet liberally forested environment, with a small pond in the foreground. The corresponding sticker sheet includes an admirable number of Triassic weirdos alongside the true dinosaurs, with plenty of the era’s “false crocodiles” included. The Permian “boomerang salamander” Diplocaulus anachronistically appears on this sheet, along with a giant amphibian that may or may not represent the Cretaceous Antarctic salamander Koolasuchus.

The Jurassic scene depicts a dense, rainy forest, with lots of lakes (or perhaps a single large swamp) dominating the open spaces. Morrison dinosaurs dominate the associated stickers, though Archaeopteryx and Rhamphorynchus make an obligatory appearance, and some Chinese dinosaurs like Gigantspinosaurus, Shunosaurus, and even Yi qi show up as well. As with the Triassic sheet, one anachronistic individual sneaks in, with what looks like the Cretaceous supermom, Maiasaura, guarding her nest.

The Cretaceous page depicts an open plain, ringed with newly-evolved flowering plants and volcanoes thundering in the far distance. The sticker sheet includes both Early and Late Cretaceous animals, with all the superstars included. I particularly like how the Spinosaurus and Sarcosuchus can be made to look like they are having a standoff, perhaps over the sawfish from the Prehistoric Ocean page?

Finally, the “Ice Age” scene should be relatively self-explanatory, depicting a frozen Pleistocene environment, with leafless trees and a small, defiant creek running down the middle. The associated stickers by contrast, while Pleistocene-heavy, are pan-Cenozoic overall, with Andrewsarchus, Uintatherium, and a brontothere representing the Eocene, and the mid-Cenozoic hoofed mammals Paraceratherium & Chalicotherium as well.

The Melissa & Doug Prehistoric Reusable Sticker Pad is pleasantly illustrated, with brightly colored, stylized, yet accurate designs, that reinforce up to date ideas about these prehistoric creatures. The reusable, static cling stickers work pretty well, and while the set is still new to my family, they have yet to lose any of their ability to cling to the page. That said, we’ve gotten plenty of enjoyment out of this set already, so I definitely recommend it as an engrossing, quiet activity for any dino obsessed youngster! (Along with the aforementioned Build Your Own Dinosaurs Sticker Book and the Jurassic Park Little Golden Book, this also happens to be another product I’ve purchased from my local drugstore and gift shop Ben Franklin Apothecary! Be sure to check them out if you’re ever in the South Dallas area.)