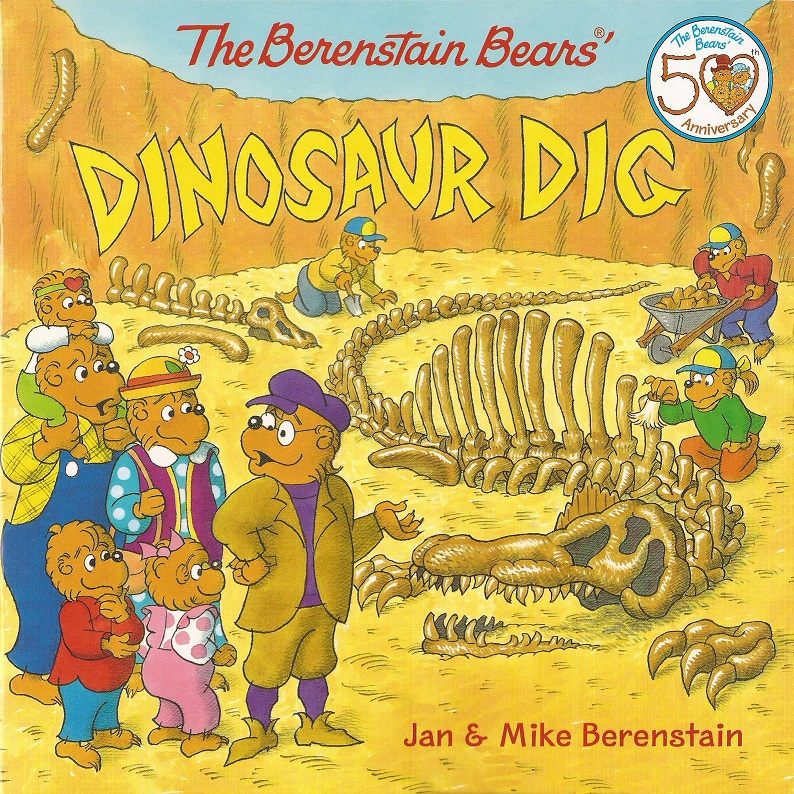 Like many people my age, I have fond memories of growing up reading the Berenstain Bear series by Stan & Jan Berenstain (and later, their son Mike). If any of my readers are somehow unfamiliar with them, the stories about these country bears generally revolve around common tropes of suburban family dramas, from dealing with bullies, to kicking bad habits, to disastrous vacations. The characters invariably end up learning lessons about positive behavior and relationships, particularly towards each other as a family.

The Berenstain Bears & The Dinosaurs, an early precursor to the subject of today’s review, does not live up to this standard. I won’t spend too much time discussing this title, as Trish Arnold and Talcott Starr already picked it apart far better than I could on an interesting episode of the Berenstain Bearcast. I recommend giving it a listen if you want some extra insight into the Berenstain’s relationship with dinosaurs over the years! I’ll simply observe here that while one can see Stan & Jan intent to simply display the exasperation parent’s can feel when they don’t understand a child’s new passion, Trish hits it on the nose when she observes that the book (accidentally) leaves readers with the apparent message: “Stop liking things!” I feel it necessary to mention the former book, because with that in mind, one gets the distinct impression that Jan & Mike wrote The Berenstain Bears’ Dinosaur Dig as a chance for a sort of do-over. It corrects many of the missteps, intentional or not, that others have called out in the original (see also Herman Diaz’s review here).

The Berenstain Bears’ Dinosaur Dig begins with Brother and Sister Bear becoming utterly fascinated by dinosaurs after discovering several books about them in their local library. Mama and Papa bear encourage this new passion with a trip to their local museum, where the run into Professor Actual Factual, who takes them on a tour of a dinosaur excavation site that oh-so-conveniently happens to be located right behind the museum!

Actual Factual describes the many dinosaurs and other prehistoric creatures he and his team have found at the site, including “the first Spinosaurus found in this area”. (Nerdy side note: this would indeed be a first: I’ve always assumed the Berenstain’s “Bear Country” vaguely approximated the Appalachian region of the U.S.A., while Spinosaurus is a distinctly Egyptian/North African species. But I digress!) 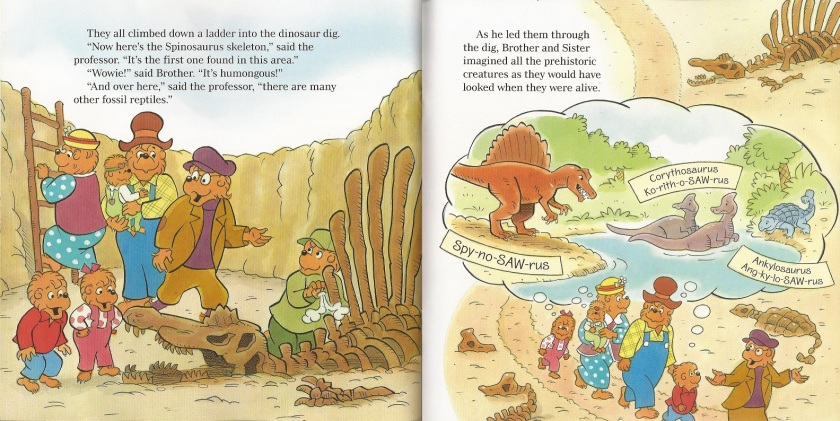 Minor trouble brews when the cubs’ museum gift shop purchases begin to overwhelm their home, but Papa resolves this minor crisis by reminding the cubs to be considerate, and to have the dinosaurs settle for the coffee table rather than his easy chair (among other inconvenient places).

My own boys love the Berenstain Bears more than any other children’s book series, and we always enjoy reading this one at story time. Many people have noted an apparent dip in the quality of the writing and illustrations in more recent Berenstain Bear stories, but The Berenstain Bears’ Dinosaur Dig manages to stand out as one of the better titles among the current generation of books on both counts. The story affirms the cubs interest and shows constructive ways in which it grows, and even when their passions begin to get in other people’s way, their parents gently correct them without discouraging their continuing creative play and self-education (this incidentally was the major failing of The Berenstain Bears & The Dinosaurs, which had the opposite conclusion). The dinosaur illustrations are rendered in the classic Berenstain style, while still generally remaining faithful to their actual looks, both as skeletons in the museum, and in their likely life appearance. Most of the minor issues I could take with any of the illustrations (such as the Spinosaurus reconstruction) generally reflect information available at the time of publication (2012), and so I won’t bother commenting on here.

For the extra nerdy types like me out there, I’d like to point out this illustration on the title page of the book. For those of you who follow the Tetrapod Zoology blog (which I highly recommend to all my readers), I’m 90% sure this sauropod can be assigned to the long tradition of the “Freaky Giraffoid Barosaurus” trope Darren Naish covered in Version 2 of the TetZoo blog. The original article has lost its images, but Naish has reused them in several articles since, as seen below.

This observation is rather inconsequential to any actual discussion of the book itself; I just thought it would be fun to point out. In any case, with its fun story and a positive message, I recommend The Berenstain Bears’ Dinosaur Dig for any dinosaur-loving kids out there. I consider it an essential part of any child’s storybook collection, and give it the Dino Dad Stomp of Approval! For more mashups of prehistoric beasts and classic children’s storybook characters, check out my reviews of the Cat & the Hat titles Oh Say Can You Say Di-no-saur? and Once Upon A Mastodon.