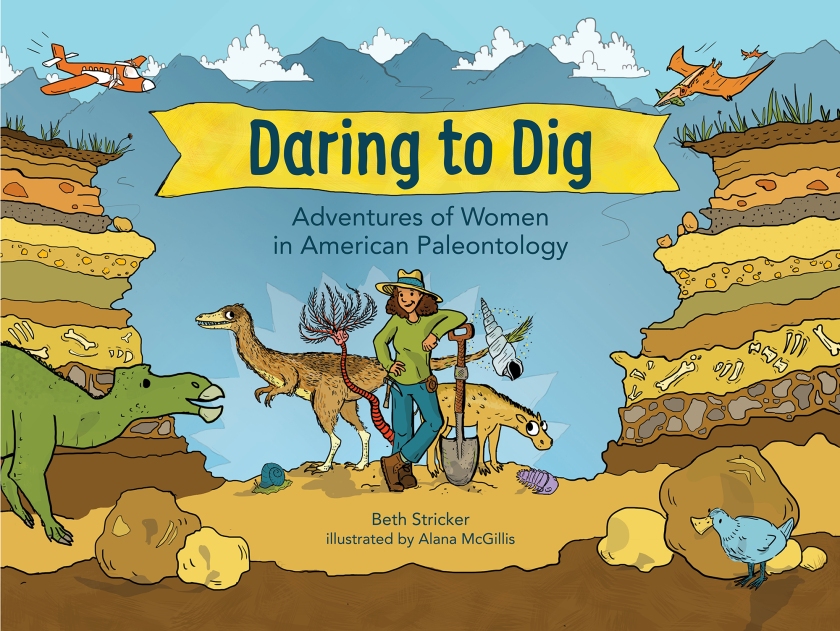 Today’s review concerns a special book from the Paleontological Research Institution, Daring to Dig! I feel somewhat embarrassed about how long I took to get around to this one. In a turn of events perhaps a bit too on the nose, I purchased this book over a year and a half ago, but for one reason or another I kept passing it over for other books people sent me or I found in the library. I’m pleased to finally to finally rectify this oversight, however, so let’s dig in! (Pun intended.)

(All illustrations copyrighted by the aforementioned PRI.)

Authored by Beth Stricker and illustrated by Alana McGillis, Daring to Dig: Adventures of Women in American Paleontology delivers on its subtitle by introducing readers to 12 important women throughout the history of American paleontology. These women were, as a rule, generally overshadowed by male paleontologists, despite many of them having a far-reaching impact on their field. For example, Annie Alexander funded and participated in many an expedition, and created the Museum of Vertebrate Zoology at UC Berkley to boot, and Tilly Edinger essentially invented the study of paleoneurology.

The author does not wallow in injustice, however, and instead brings these women back into the spotlight by exuberantly celebrating their most iconic works, from foundational texts to important breakthrough discoveries. This not only familiarizes readers with historically important individuals, but also introduces them to the ongoing research inspired by these scientific pioneers.

While dinosaurs and fossils are my bread and butter, I’m also a minor history buff, and it’s interesting to see the ways in which these paleontologists’ work intersects with major historical events. At the risk of pulling a History Channel, a pair of individuals active during WWII are the highlights of this historical perspective. Tilly Edinger had to take a harrowing intermission in her work during her escape from Nazi persecution, while Julia Gardner directly used her expertise in micropaleontology to pinpoint the origin of Japanese balloon bombs in the Pacific Theater.

Believe it or not, Daring to Dig actually happens to be among my sons’ favorite books! My oldest will read through the whole book with gusto, often repeating information back to me as if he’s learning it for the first time. However, boys being boys, I’m pretty sure we owe this attentiveness at least in part to their favorite page, concerning coprolite specialist Karen Chin. While it genuinely holds their interest and they don’t make a big joke out of it, it nevertheless feels humurously on-brand that this scatological topic most captures the attention of my kids. (After all, the coprolite song was also their favorite track amongst Professor’s Flint’s paleo-themed albums!)

I really enjoy this book myself, and it even taught me a few things. I hadn’t heard of half these women before this book came out, and my love of both history and paleontology appreciates the detail included. I admit it took me a little while to warm up the illustrations; while I try to accomodate artistic license, I tend to have a bias towards precision in paleoart. Initially something about the illustrations felt a little looser and more imprecise than they needed to, but I can no longer put my finger on what exactly I thought about them. I’ve have since come to enjoy the artwork, and I now think it suits the light-hearted and child friendly nature of the book quite well.

I highly recommend this book, especially (but as my case should make quite clear, not exclusively) for families with young girls interested in dinosaurs and fossils. These 12 women make inspiring role models for everyone, and I always approve of bringing lesser known aspects of history into the spotlight. I suppose my only disappointment is that we only get introduced to 12 people! One could easily fill a much larger book with important women in paleontology. I particularly would’ve enjoyed to see the inclusion of expert fossil hunter Wendy Slodoba, as well as perhaps the most famous female paleontologist since Mary Anning, Mary Schweitzer, of tyrannosaur soft-tissue fame. (If you want to learn more about the latter, Stated Clearly has an excellent video about her.) That’s of course to say nothing about the various paleontologist I follow online, like ankylosaur expert Victoria Arbour, paleo-educator Ashley Hall (who also got a brief mention in Cruisin’ the Fossil Coastline!), and many others. (And of course there are always those whose research ends up contributing to new insights in paleontology, even if they themselves study different disciplines, such as Marie Tharpe, though I don’t think anybody can top The Amoeba People’s amazing music video about her!)

Hmm, well my own blog post will quickly become a clunky mess if I don’t wrap things up, so I guess I can appreciate the necessity of Daring to Dig‘s choice to limit the number of individuals featured. If you’d like to learn more, though, I recommend checking out She Found Fossils. Though I’ve yet to get around to buying this one myself, it looks like it features several more women not covered in this book. I’ve also reviewed a few other books that emphasize the role of women in paleontology, such as Stone Girl, Bone Girl, The Adventures of Padma and a Blue Dinosaur, and The Dinosaur Expert. As for Daring to Dig in particular, I suggest you go pick up a copy immediately, as it has definitely earned a solid Dino Dad Stomp of Approval!

Oh, and P.S., I’d be remiss if I didn’t mention that Mary Anning’s Revenge reviewed this book long before I did, with an interview with illustrator Alana McGillis to boot!