After a brief bout of writer’s block we’re back, this time with a follow-up to Paleo Sharks, which I featured as a Shark Week tie-in last year. Today’s review concerns its companion piece, Paleo Bugs: Survival of the Creepiest. Both these books were authored & illustrated by Timothy J. Bradley, who I’ve recently discovered has quite a few interesting looking prehistory-themed books under his belt, so we may see more from him here in the future!

Like Paleo Sharks, this book takes readers on a tour through the Paleozoic, Mesozoic, and Cenozoic Eras, introducing interesting and important prehistoric “bugs” along the way. Also like Paleo Sharks, Paleo Bugs works with a similarly broad definition of its title creatures, in this case essentially equating “bugs” with “arthropods” (AKA animals with exoskeletons and jointed limbs). While this book is aimed at older kids with some knowledge of prehistory, running with this more colloquial usage helps ease the reader into the topic at hand.

Bradley gives a brief introduction to each time period, setting the scene before launching into more detailed profiles of individual species. Each animal gets a brief description along with a portrait of it in its environment, as well as a sidebar which provides additional information on the featured creature or its relatives and cohabitants. Each page also includes a handy scale chart in this side bar, with many species compared to the size of a human hand, though the larger ones necessitate comparison to the size of an entire human child! Bradley’s eye catching and dynamic illustrations really help bring to life these prehistoric creatures that many would otherwise write off as less interesting than the dinosaurs. I present but a scant few below to show what I mean.

The book starts off strong with a nice Burgess Shale scene depicting some of the classic denizens of the Cambrian Period. Santacaris is the star of the scene, as it snabs a hapless Opabinia for dinner. The strange, spindly, trilobite-like animal Marella scrurries off-page to look for a quieter area to forage, while the giant predatory Anomalocaris looms in the background, presumably watching for a chance to prey upon Santacaris in turn. Marella is an interesting critter, and its fossils actually play an important role in our understanding of the evolution of blood, as demonstrated in a recent episode of PBS Eons. Incidentally, if you enjoyed Samantha Turner’s THE BIG DIE which I featured here relatively recently, you should check out her creature-creator game Snab Lab, which lets you recreate all these paleo bugs and more! It’s almost as fun to unwind with as THE BIG DIE.

The cover, which you can see up top as the header of this post, features the gigantic Carboniferous millipede Arthropleura pursued by a ferocious looking amphibian. When we see them again on page 22, however, we realize a simple misunderstanding lies at the root of the amphibian’s anger, as it seems the Arthropleura accidentally walked right over it while it napped on a riverbank! Speaking of Carboniferous giants, the famous giant dragonfly Meganeura off course makes an appearance as while, buzzing straight towards the viewer, scattering its startlingly smaller relatives in all directions.

The prehistoric dung beetle Aphodiites presents a fun excuse to include dinosaurs in the book. The illustration features a trio of dung beetles tussling over a dung ball, while a herd of Diplodocus lumbers on in the background, the apparent source of the dung beetles’ prize. I like the low angle of the scene. While sensible for showing off the beetles, it’s not a typical view of the sauropods, and helps emphasize the incredible difference in size between these two species. I have to give an outside-the-box illustration like this high marks!

This book unfortunately shares the main issue I took with Paleo Sharks: a disappointingly scant section covering the Cenozoic Era. As before, this section only covers a single species, in this case the Eocene butterfly Prodryas. There’s also an error in the text that states it lived “40 million years ago in the Cretaceous”, rather than the Eocene, as it should. It gets a nice pair of illustrations at least, one of which features a chalicothere feeding on the tree the butterflies live in.

I wish the Cenozoic section had been more substantial. While Megalodon may far outshine other Cenozoic sharks, there are plenty of fossil bugs from the Cenozoic just as interesting as their more ancient brethren. Dominican Amber, just to pull one example off the top of my head, is actually rather famous for its fantastic record of all sorts of arthropods and other organisms. This gives scientists fantastic insight into an ancient tropical forest that I’m sure any illustrator would love to depict. Dominican Amber is famous enough that it even features in the movie Jurassic Park, even though it in fact dates to about 25 million years AFTER the age of the dinosaurs. 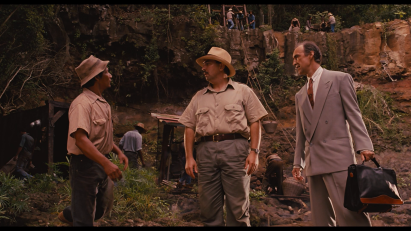 But, rather than criticize the book for what it omits, I think I’ll end with praising it for what it does well. Paleo Bugs introduces readers to a wide variety of prehistoric arthropods, many otherwise unknown in the world of popular paleontological literature. It’s always nice to see more obscure species get their chance at the spotlight, especially in a book as eye-catching as this. It also helps that while science has moved beyond a few of the reconstructions in Paleo Sharks, to my knowledge everything in Paleo Bugs is more or less up to date, extending its educational value. If you’ve got a young one interested in both prehistoric life and all manner of creepy crawlies, whether they devour the text or simply enjoy the illustrations Paleo Bugs: Survival of the Creepiest is the one for you!