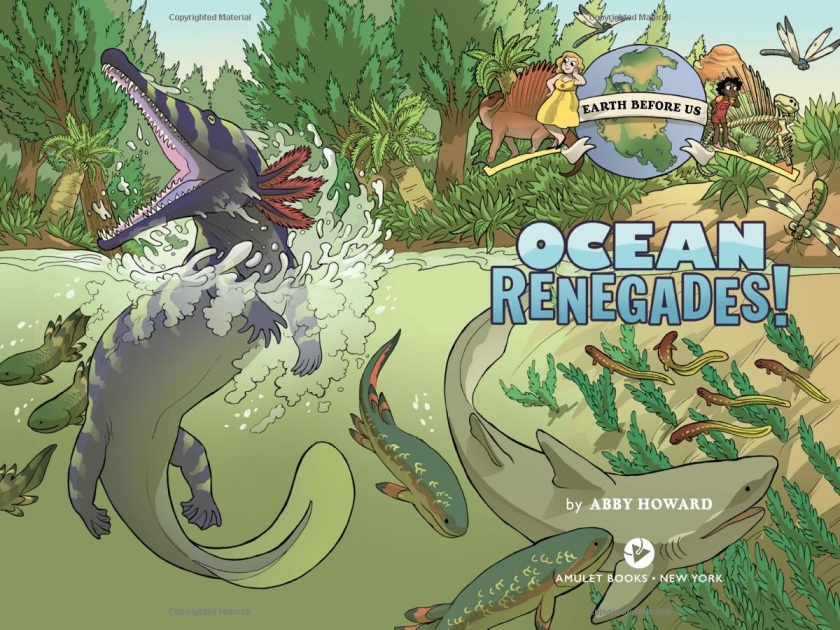 Today I’m excited to present to you Book 2 of Abby Howard‘s Earth Before Us series, Ocean Renegades! If you’re unfamiliar with the Earth Before Us set of graphic novels, be sure to also check out Book 1, Dinosaur Empire!, which introduces readers to the characters of Ronnie & Ms. Lernin, though it certainly doesn’t diminish the reading experience if one reads them “out of order”. You might even find you prefer starting with Ocean Renegades!, as it deals with the time on Earth before the dinosaurs.

In any case, this time the book starts with Ronnie spending a weekend with Ms Lernin as Ronnie’s parents head off on a trip. Ronnie strongly hints at her desire to see more ancient creatures, to which Ms Lernin gladly acquiesces… by taking her to an aquarium. Disappointed, Ronnie grudgingly plods along after Ms Lernin through the exhibits. Realizing Ronnie wanted another time travel adventure instead, and that her young protege finds the modern sea creatures relatively boring, they hop into a nearby waste bin and travel back to the Cambrian Period, when complex life really took off.

As before, they progress from there through the various periods of Earth’s history, coming face to face with the fascinating organisms of the Paleozoic Era. By the end of the journey, Ronnie has a newfound appreciation for modern sea creatures as the inheritors of a millions-year-old dynasty, and the duo decide to stay at the aquarium and enjoy all its inhabitants with newfound appreciation for their place in the web of life. 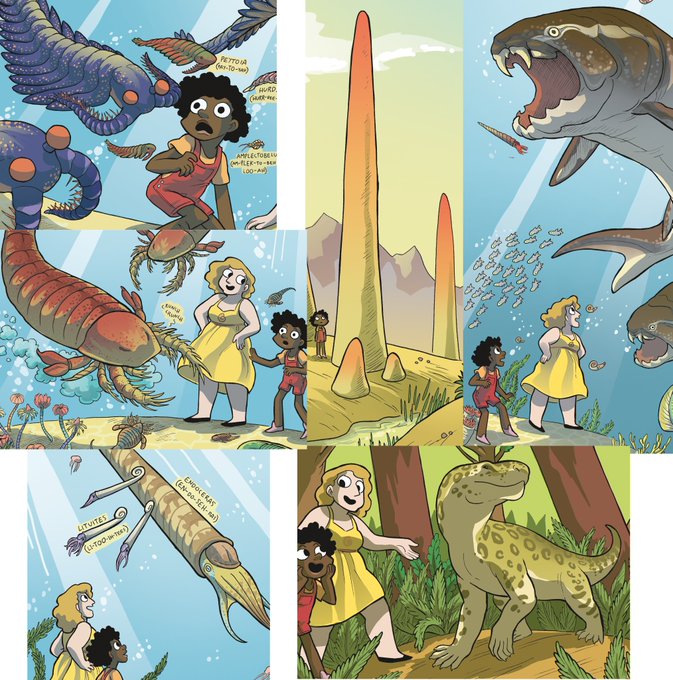 Abby Howard knocks it out of the park again with this one. All the praise I had for the science and art in Dinosaur Empire! applies here as well, perhaps doubly so, since the Paleozoic Era as a whole tends to get so little love in the popular press, especially when it comes to kids’ books. I also continue to adore the fact that Howard always takes the time to explore what others might consider niche subjects in the course of her prehistory graphic novels. What other book would dare interrupt one character in the act of introducing a scary new predator with the other character’s demand to learn more about some funky trees? This is the kind of wonderfully comprehensive scicomm you get when you make an actual effort to make a subject interesting, rather than chase after whatever subject market research tells you is already a hot fad.

Don’t worry about slogging through some obligatory side material on your way to the good stuff, by the way. Howard’s art and writing never fails to convey an aura of fascination for any of the plants, animals, and even fungi she highlights, and the stars of the Paleozoic don’t suffer for sharing the limelight with their lesser known peers. There are paleobugs and paleosharks galore to be found within these pages, and the reader gets to meet multiple species of Dimetrodon, from the smallest to the biggest. Far from a mere sightseeing tour, Howard always ties everything together in the context of their environment, evolutionary history, and relationship to present day. (Personally, this Ray Troll fan would’ve enjoyed seeing Helicoprion land a starring role, but I can’t complain.)

The writing remains as engaging as ever. Others have favorably compared the “Earth Before Us” series to the Magic School Bus, a comparison that is not entirely unwarranted. Ronnie’s questions feel pretty true to what a real child might ask, and Ms. Lernin explains everything in an easy to follow manner that never feels dumbed down. Their interactions are always entertaining, and I enjoyed watching Ronnie’s growing fascination turn into a broader appreciation for life both modern and ancient.

I had great time reading Abby Howard’s Ocean Renegades! Like its predecessor, Dinosaur Empire!, I thoroughly enjoyed its fun artwork, an entertaining story, and excellent science communication. I definitely recommend it for readers of all ages! I’ve enjoyed the Earth Before Us series so far, and I eagerly look forward to the release of the third book, Mammal Takeover!, later this year. Be sure to follow Abby Howard on Twitter and Instagram for updates, as well as Dino Dad Reviews for the next review in this series. For now, I’m pleased to give Ocean Renegades! the Dino Dad Stomp of Approval!

Be sure to read my review of Dinosaur Empire! if you haven’t already, and watch this space for my upcoming review of the next volume in Abby Howard’s “Earth Before Us” series: Mammal Takeover! 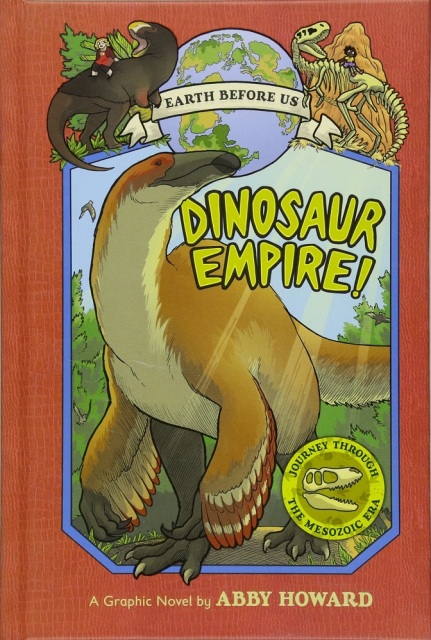