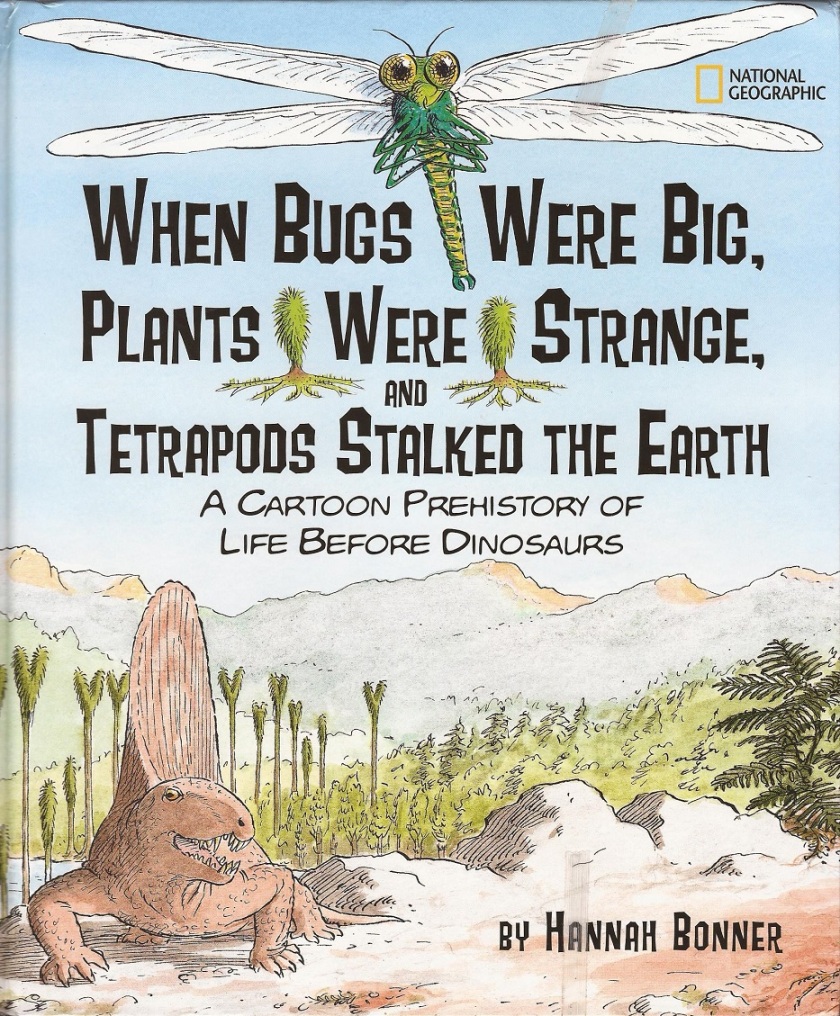 I have gone far too long without review a Hannah Bonner book! I featured When Fish Got Feet, Sharks Got Teeth, and Bugs Began to Swarm relatively early on in this blog’s life, and I have always meant to review the rest of Bonner’s “When” series (I have since also reviewed When Dinos Dawned, Mammals Got Munched, and Pterosaurs Took Flight). I started with the second book in the series last time, as it covered the chronologically earliest period of time. Continuing from there, today’s review concerns the second book in the series, When Bugs Were Big, Plants Were Strange, and Tetrapods Stalked the Earth, which covers the Carboniferous and Permian periods of our planet’s history. It’s an older book, so you’re only likely to find used copies easily these days, but Bonner has since re-released it in a compilation book with the other two entries in this series, now re-titled When Fish Got Feet, When Bugs Were Big, and When Dinos Dawned. It also contains some updates to the previous editions, one of which in particular I’ll mention later on in this review.

As the subtitle “A Cartoon Prehistory” suggests, Bonner illustrates her books in a loose, cartoony style, though she plays less fast and loose with her designs than you might expect. Think more “New Yorker” cartoons rather than Sunday comic strips, even if the humor isn’t quite so stuffy. Having read the later two books in the series, there’s something about this one that feels slightly less developed than the other two. Perhaps it’s slightly less jam-packed with content, or perhaps the cartoony elements are more conservative and less integrated with the more detailed illustrations than in the other titles. I can’t quite put my finger on it, but readers should only notice it if they over-analyze things as much as I do.

I mentioned that this book possibly feels less jam-packed than it’s companions, but that’s not to says it skimps out by any means! Bonner’s attention is as comprehensive as ever, with equal attention paid to small reef dwellers and obscure plants as to giant bugs and famous synapsids. In fact, I found it oddly refreshingly just how matter-of-factly Dimetrodon appeared in the book alongside other creatures of its time. Other books would have latched on to the one bona fide superstar of its time and tried to squeeze as many pages of content out of this one creature as possible, to the detriment of other species.

Now as an older book, science has of course continued marching on, and scientists have re-evaluated certain fossils in the intervening time. As a result, the Megarachne illustrated on page 19 now represents an outdated interpretation of the creature. Once thought of as a sort of proto-spider, recent research indicates it belongs to the Eurypterids, or sea scoprion clade, instead. Bonner herself noted she appreciated the chance to update this illustration in particular with the release of the compilation book When Fish Got Feet, When Bugs Were Big, and When Dinos Dawned. Even if there was no update, I still wouldn’t fault her for what she couldn’t have known. Plus, I can attest most other books featuring prehistoric arthropods, such as Paleo Bugs and Bugs! Explorer still contain this same error. No other inaccuracies immediately jump out at me at this time, but Bonner does her work with careful attention to detail, and I can practically guarantee any other small errors one might find in her books similarly stem from the inevitable march of science.

Small quibbles aside, I enjoy this book almost as much as Bonner’s others. Ultimately, small changes in interpretations of specific fossils don’t do much to change the overall view of the time periods covered in this book, and so When Bugs Were Big, Plants Were Strange, and Tetrapods Stalked the Earth remains highly recommended by me. Bonner’s illustrations, whether silly cartoons or serene landscapes, look as lovely here as they do in later books. If this one were still widely available, I would certainly recommend it, but as mentioned before, you’re more likely to find the updated compilation book When Fish Got Feet, When Bugs Were Big, and When Dinos Dawned these days anyway. If this review as got you intrigued to see more of her work, check out reviews of When Fish Got Feet, Sharks Got Teeth, and Bugs Began to Swarm & When Dinos Dawned, Mammals Got Munched, and Pterosaurs Took Flight, or just go straight ahead and buy them anyway, knowing they all get my Dino Dad Stomp of Approval!