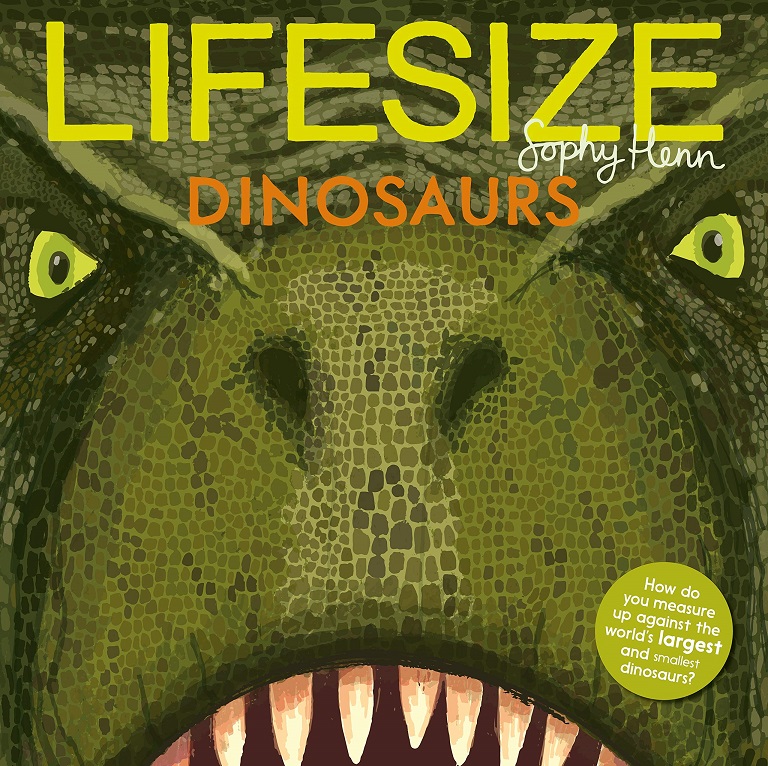 Greetings, dear readers! Today I’m pleased to bring to you, if not quite an “exclusive”, certainly something of an “early bird special”! I often browse around on Instagram to see what other people are reading to get ideas for future reviews, and recently I got to talking to Melissa Campbell, who runs Melissa’s Book Boutique, selling Usborne books and more. Lifesize Dinosaurs in particular had caught my eye, and Melissa offered to send it to me a review copy as soon as it came out! If you’d like to order it for yourself, check out this and other titles at her online storefront. I found several other titles I’ve been keeping an eye out for that I’ll definitely be buying from her in the future!

Now on to the book itself. Written and illustrated by Sophy Henn, Lifesize Dinosaurs features paintings of several species of dinosaur (and one pterosaur) at a true-to-life size. For smaller subjects such as Microraptor, they can easily fit on a double page spread, but for others, this means we see some key body part instead, such as the foot of a Utahraptor, or the maw of a Tyrannosaurus rex. By necessity, the book measures in at an impressive size in order to capture reasonable chunks of the featured creatures: 12″ x 12″ for the front cover, and nearly 4 feet wide when the largest flaps are folded out.

The book’s main educational goal is giving an experiential impression of just how big these animals were, and so it gives its primary focus to the illustrations. The text, while providing accurate information, generally keeps itself somewhat sparse but still manages to find space to give some interesting context to the animals and their environment. I enjoyed the little shout-out to the appearance of the first bees alongside the first flowers! I also appreciated the detailed look at various types of dinosaur eggs. While one can often find a token Maiasaura or some other species to illustrate the idea that many dinosaurs were good parents, the whole subject invariably gets glossed over in many kid’s texts. By contrast, this book devotes an entire double-page spread to various types of dinosaur eggs, and gives a brief but detailed description of the likely parents of each one. Can you spot the Jurassic Park reference?

The book has a nice interactive element to it, too. Henn frequently invites the reader to compare their own body parts to various saurian features, such as comparing their nose to a Pteranodon beak, or a Utahraptor’s talons to their own feet. My boys really had fun getting into the comparisons, and found some of them rather funny!

I generally like the loose, child-friendly artistic style employed here. My brain keeps trying to call it impressionistic, but I know that’s not right. I think I’m looking for the painterly equivalent of a “sketchy” drawing style. In any case, the illustrations are generally pleasant in and of themselves. Each life-size drawing pairs with a double page spread depicting the animal in the context of of its environment, as well some of the other animals that one might find alongside it. Unfortunately, while some degree of stylization naturally goes with such an artistic , the dinosaurs are generally a lot more imprecise than they need to be. The dromaeosaurs (“raptor” dinosaurs) suffer in particular, with hands that stick out beyond their wings. The outermost feathers would have attached to the fingers, as they do in modern birds, and so the hands should be hidden under the leading edge of the wings. I’m not sure why Henn fell so frequently into this trap, as the Beibeilong in the size chart in the back has proper wings, unlike the dromaeosaurs on the same page.

If you’ve followed me for a while, you may have noticed I have a bit of  a fondness for a good chart or two in my dinosaur books, and I rather enjoy this one. Other “lifesized” books I’ve previously read usually use the back of the book to give an obligatory full body shot of the animals featured elsewhere, with a brief blurb of extra info. However, since that’s already been done earlier in this book, Henn uses this space somewhat more creatively, not only comparing the relative sizes of each dinosaur, but also measuring them by the number of copies of Lifesize Dinosaurs you’d need to line up to reach the length of each animal! As I mentioned before, the book is about a foot long, so the number of books conveniently translates directly into feet for the curious. 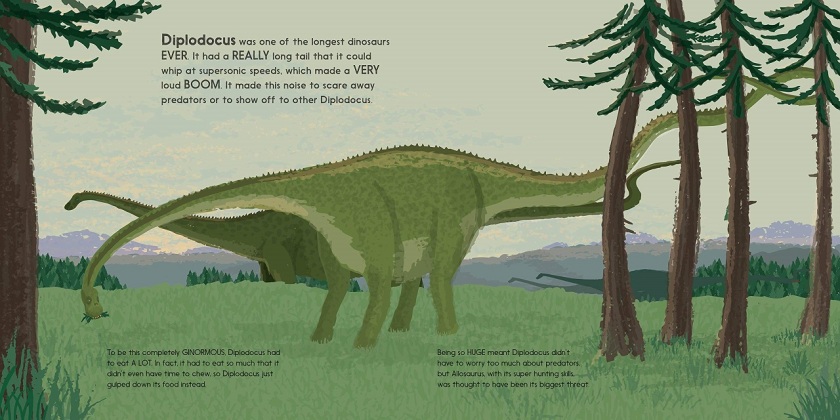 Before I wrap up, I just wanted to praise a couple of illustrations in particular. While I unfortunately didn’t think much of a few of the more environmental illustrations, I found the landscapes featuring the Diplodocus and the Pteranodon quite arresting. Both of them vaguely remind me of Mark Witton’s paleoart (very high praise if you’re not familiar with him). The Diplodocus in particular is a fantastic illustration of the seemingly paradoxical point he made in his discussion of paleoart featuring Dreadnoughtus. In a somewhat counter-intuitive nutshell, the further away an artist places a sauropod from the viewer, the better they can emphasize the dinosaur’s size. Without getting too detailed, the various distances of the animals in this scene along with the placement of trees and mountains all work together to clearly drive home the emphatic message: “This is a big honkin’ animal!!!”

I also rather enjoyed the Pteranodon scene; the sudden change in the book’s orientation already makes this scene feel rather dynamic, and creates a strong vertical component to the scene. This is quite fitting for an animal that spent its life at the intersection of sky and sea, and a nice depiction of Pteranodon’s likely habit of diving for fish also demonstrates this sense of dual worlds. It’s a behavior one doesn’t often see depicted; indeed, many people express surprise at the idea that pterosaurs could even swim at all, despite the diet of fish so many of them relied on. Kudos for including an obscure plesiosaur in the form of Albertonectes, too! This particular species actually happens to also star in the title role of another children’s book I’ve review, The Plesiosaur’s Neck! I recommend giving that one a look as well.

All in all, despite a few missteps, I really enjoyed Lifesize Dinosaurs! It’s easily the best book out there in the “lifesize” genre that I’ve seen, and it appeals to kids of all ages. I definitely recommend it to any dinosaur lovers out there, especially those with an interest in books that break the usual mold in children’s dinosaur literature. A big thank you once again to Melissa! You can follow here social media updates on Instagram and Facebook, and be sure to browse Melissa’s Book Boutique’s online storefront for more titles! I don’t know about you, but I’ve got my eye on 100 Pterosaurs to Fold and Fly…