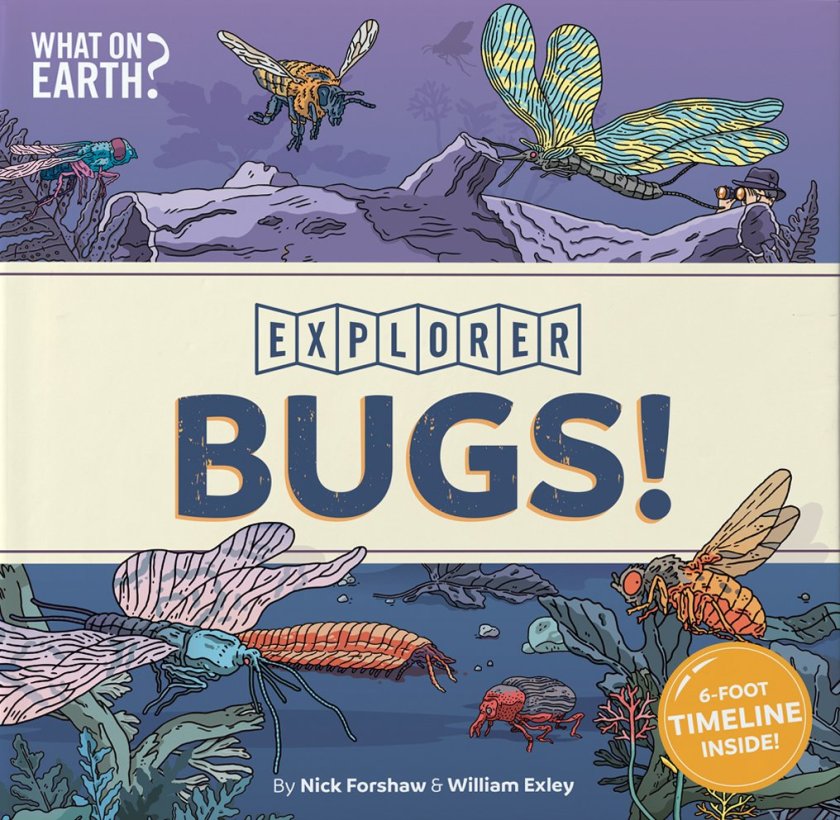 I’ve had the subject of today’s review out on loan from the library for quite some time, and while this particular library allows a surprising number of renewals, I’m beginning to feel bad about keeping it out of circulation for so long. So, without any further ado, let’s dive into Bugs! Explorer, a creepy-crawly entry in the “What On Earth?” series, to which The Nature Timeline Wallbook, Plants! Explorer, and Mammals! Explorer also belong.

Like we saw in my review of Paleo Bugs, this book takes a similarly broad definition of the term “bugs”. It generally focuses on arthropods as a whole (including insects, arachnids, crustaceans, etc.), though the occasional worm gets thrown in as well.

Authored by Nick Forshaw, and illustrated by William Exley, the book presents itself as the journal of Eric Eagle, of the Eagle-Eyed Explorer Club, though it really doesn’t commit to this format, and just reads like a normal book with occasional notes scribbled at the beginnings and ends of chapters.

While Paleo Bugs simply presented its subjects sequentially by time period, Bugs! Explorer provides a more extensive overview of arthropods both living and extinct, with chapters on their natural history, life cycle, and even famous scientists who have studied them! Forshaw makes sure to properly explain key concepts throughout the book, ensuring that the reader never feels lost in the swarm of information.

Exley’s illustrations have a similar look to those in The Nature Timeline Wallbook, though here they seem more consistently accurate, at least to my eye. Perhaps the lack of pop culture representation for many prehistoric bugs forced the illustrator to rely more closely on fossil references for this book? I go back and forth on how much I like the art style, but that relies more on subjective taste. As long as its subjects get clear and accurate representation, it ultimately works for me.

Just to cement the comparison to the Wallbook, Bugs! Explorer also includes a six foot fold-out timeline, this time in the back of the book. This is perhaps my favorite feature of the book, as I always enjoy fun charts like this that help frame the subject material in a larger context. It also helps that it spans the entire evolutionary history of bugs right up to the modern day. This forces it to address my main criticism of Paleo Bugs, and hence features Cenozoic arthropods just as extensively as those from before and during the Age of the Dinosaurs.

All in all, I rather liked Bugs! Explorer, and it makes an excellent companion to The Nature Timeline Wallbook. While I certainly recommend the latter, it just missed my full Stomp of Approval, but this one needs no such qualifier (see also my review of Mammals! Explorer and Plants! Explorer). With quality illustrations, much more in-depth information, and a focus on often underrepresented subjects, I give this book the Dino Dad Stomp of Approval. Be sure to keep an eye out for our next book review, “X-Ray Dinosaurs and Other Prehistoric Creatures“!