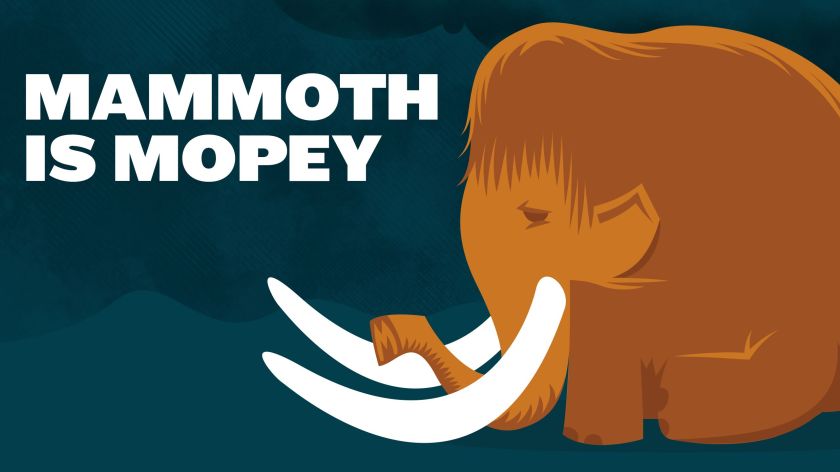 So I promised in the last review to show you some better prehistoric ABC books, and I thought I might as well go straight to the top for this one. A proper reviewer would string you along until the end before delivering a verdict, but I won’t bury the lede here; Mammoth is Mopey is quite possibly the best prehistoric alphabet book on the market right now. In any case, it’s certainly my favorite.

Written and illustrated by David & Jennie Orr, each page features a different prehistoric creature (along with an often humorous verb or adjective) for each letter of the alphabet. For example, we get an artistic Ankylosaurus, a gorgeous Gorgonops, and of course a mopey Mammoth. Each critter is illustrated in a cute, kid-friendly style that would not look out of place as the theming for a youngster’s bedroom. But you won’t find any blobby, Precious Moments Godzillas in this book. David Orr has often expressed an affinity for a minimalist art style that does not sacrifice to fidelity to the source material, and here we see an excellent manifestation of that drive. These certainly are not rigorous anatomical reproductions of these creatures, and yet each is still clearly recognizable, with the key features the real animal would’ve possessed in life. The effect is not dissimilar to how one would stylize any modern animal: for example, the cartoon elephants on a toddler’s pajamas may not be perfect representations of the real thing, but neither do they have random spikes on their back or other such silly things. (For more examples of a mostly decent minimalist style, check out my review of “ROAR: A Dinosaur Tour“.) 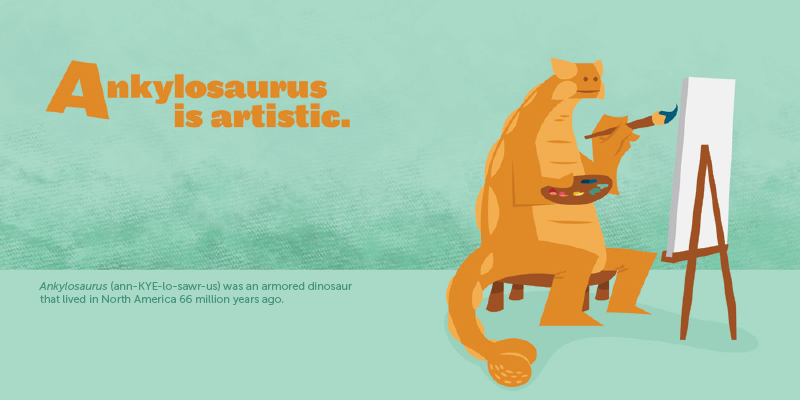 Beyond the critters themselves, I enjoy the overall design of the pages as well. The backgrounds are relatively plain and unobtrusive, yet still bring fun detail to the pictures. Many animals are set against nondescript forests or rocky backdrops, but others have more amusing designs, such as the cityscape behind the dapper Dinofelis. The Spinosaurus page has to be my favorite, though. The repeating fish pattern and gentle waves along the bottom stands out as one of the more eye-catching backgrounds, and even suggests something of the real Spinosaurus’s life habits. Not only that, but the fish in the pattern even happen to specifically represent the giant coelacanth Mawsonia, which shared its habitat with this semi-aquatic fish-eater. With such attention to detail on its page, it’s no wonder why this Spinosaur is smiling! 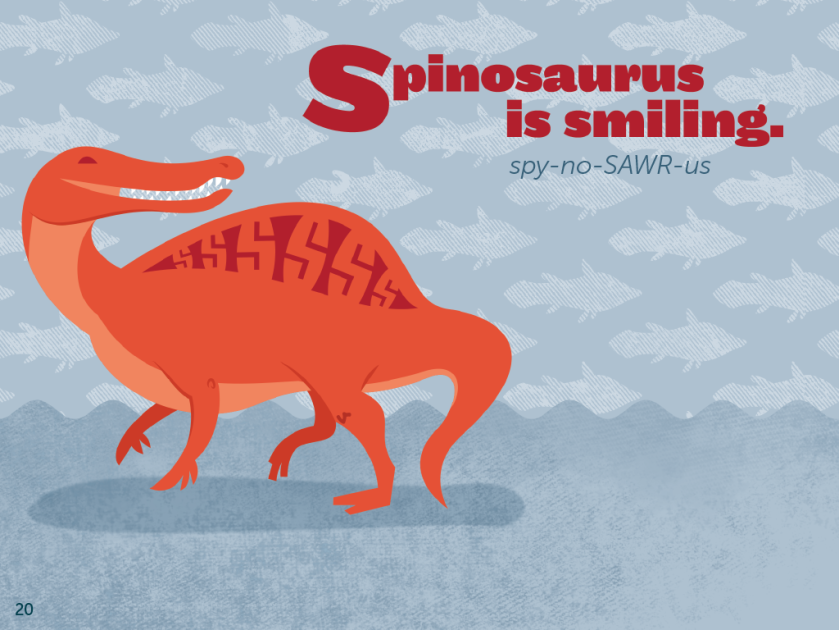 I wouldn’t normally think to mention this, but after the last book I reviewed, I certainly appreciate the simple, easy-to-read text. It’s easy on the eyes, and doesn’t overstay its welcome. A final note on design: each picture incorporates its respective letter of the alphabet somewhere in the illustration. Some are more obvious than others, but I’m pretty sure every single image has one. The only picture I haven’t figured out yet is the Quetzalcoatlus. I’m not sure where to find the Q on that one! (I’m not going to post a picture of it here; buy the book for yourself to see if you can best me!)

A final noteworthy feature of the book: the authors intentionally largely avoided many of the more popular dinosaurs in favor of shining the spotlight on other deserving species. Of course there’s a few more well-known critters like Velociraptor and the titular mopey Mammoth, but have you ever heard of Estemmenosuchus or Opabinia? Any parents reading this aloud to their children may find their knowledge of prehistoric life expanding right alongside their kids! I consider this a definite point in favor of the book; however, if I had to rack my brain to come up with a criticism, I might settle on this. Having gifted this book to multiple sets of friends upon becoming new parents, several have joked that they might have to leave the reading up to me (despite the handy pronunciation guide on each page). One could make the argument that perhaps some of these animals are a little TOO obscure, but for the life of me I would not be able to single out any particular one. It’s a rather silly argument that something should be kept out of a book because it hasn’t been featured in enough other books, and as a huge paleo-nerd, I have a particular soft spot for several of these lesser-known species. I suppose the choice of subjects may simply be a “your mileage may vary” sort of thing. 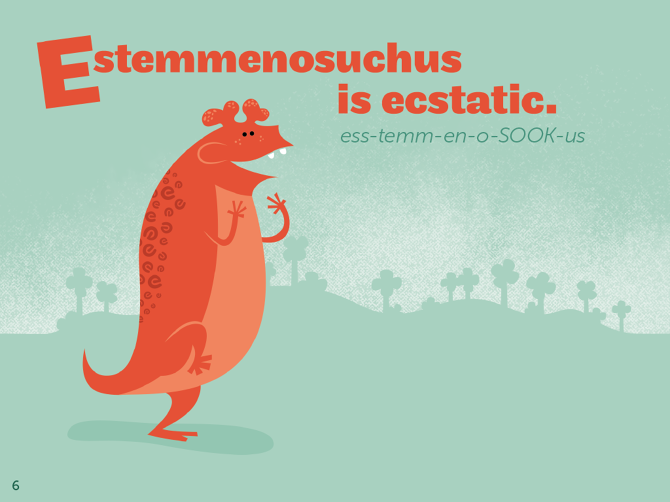 As an added bonus, each copy of the physical book comes with an ebook version as well, which includes bonus material such as additional in-depth facts about the creatures found within the book. This makes it easy to take on-the-go, and helps extend the book’s appeal to older, more studious kids as well. 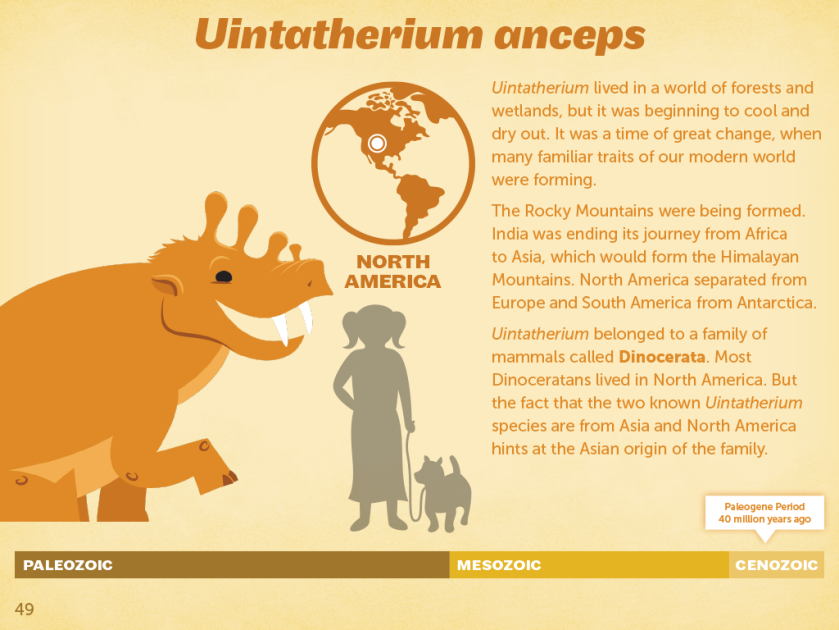 All in all, I can’t praise Mammoth is Mopey highly enough. It does exactly what it needs to for exactly the type of book it wants to be. I find the illustrations endearing, the wordplay entertaining, and the animals kept me guessing as I read on through. I consider it a must-have for the home library of any young lovers of prehistory. Even the physical size of the book is perfect for little hands, as my youngest independently discovered, much to my delight.

I’m sure it’s no surprise then that I heartily give this book the Dino Dad “Stomp of Approval”! Please check out David Orr’s website to purchase the book, and be sure to peruse his the rest of his portfolio. You might also want to check out Love in the Time of Chasmosaurs, which he runs with several other dinosaur aficionados (and is in my opinion among the best dinosaur blogs on the web). You won’t be disappointed!