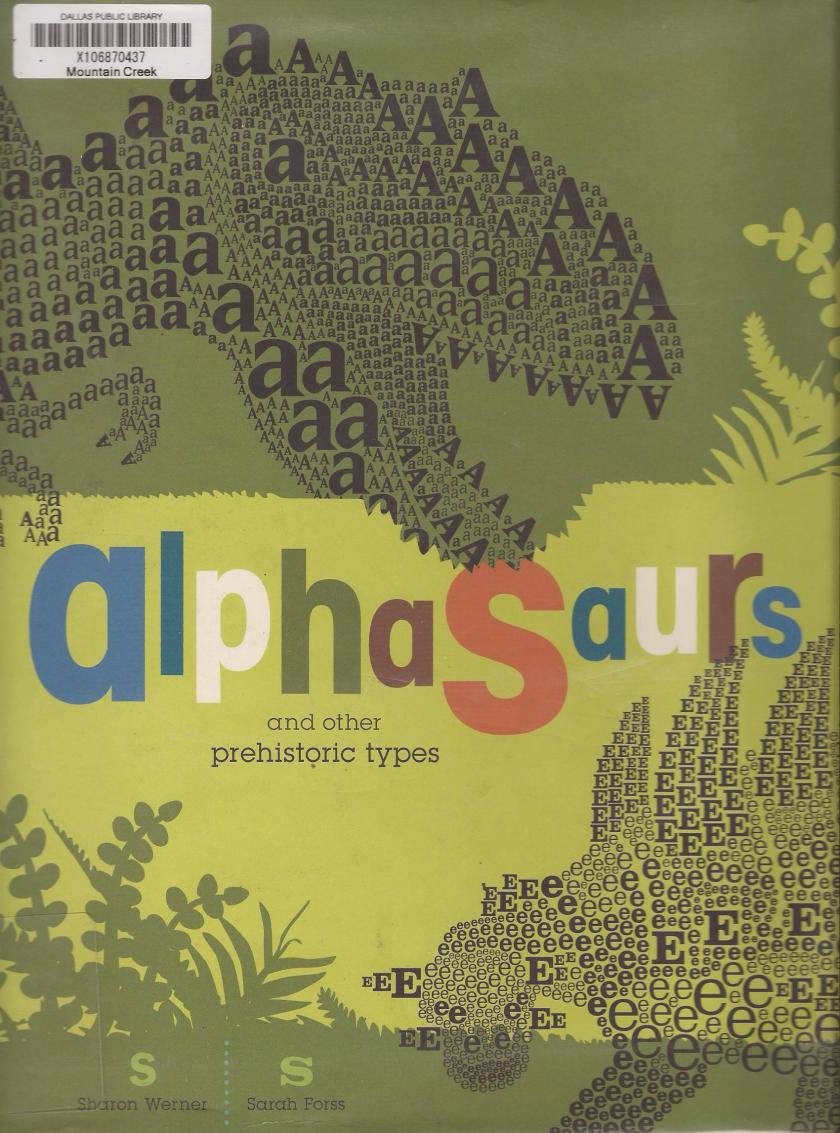 I’ve covered a few prehistoric alphabet books here by now: Dinosaur ABC, Mammoth is Mopey, and Poke-A-Dot! Dinosaurs A to Z all fit this mold. Seeing how many books of this nature are out there, I figured it was high time for another! Today’s review concerns Alphasaurs ad Other Prehistoric Types, by Sharon Werner and Sarah Forss. Like most other “dinosaur” alphabet books, it includes a few non-dinosaurs, though the title at least cops to this, and the text makes clear which creatures actually count as dinosaurs.

This book has an interesting graphic design element to it. Rather than the usual drawings or paintings, the prehistoric creatures in this book are illustrated via a collage of letters that make up the animal’s shape. Not only that, but by clever variations in the typeface, the creators of this book even manage to suggest the contours of the animals’ bodies! I’m particularly impressed at how they managed to convey the feathers of Microraptor by altering the size and weight of upper and lower case M’s.

Several pages also have flaps that extend the picture beyond the margins of the book. In the case of Xenoposeidon, this reveals an alternate view of the animal, switching between its “life appearance” and an “X-ray image” of its skeleton. Both images show the approximate location of the one known bone of this animal, which adds a fun interactive element to the image.

Though somewhat “low resolution” by virtue of its format, I’m impressed with how well some of these prehistoric creatures are reconstructed. A few fumbles knock the whole experience down a few points for me, however. While several well-feathered dinosaurs appear like Microraptor, Jinfengopteryx, and Fruitadens, the larger dromaeosaurs (raptors) are sorely under-feathered. Sadly, despite having perhaps the crispest, best defined features in the book, the Iguanodon also suffers from the most out-of-date reconstruction, stuck with an appearance right out of another era of paleoart entirely, such as the illustrations of Neave Parker.

Each page also comes with a series of briefs factoids about the animal in question. Amusingly, the authors always try to incorporate the featured letter of the alphabet as much as possible in each of these factoids, producing pleasing alliterations such as “Parasaurolophus Preferred to Peck Pine needles and Plant Parts from high Places”. Unfortunately, in order to maintain this gimmick, these tidbits of information sometimes stretch the truth a bit, with “facts” that, while you can tell what the authors were going for, don’t quite match up to the real animal. We get perhaps the clearest example with Fruitadens. While small and likely omnivorous, calling it a ferocious hunter of prey and the smallest dinosaur found don’t really produce an accurate mental picture of the animal.

All in all, Alphasaurs presents the reader with an enjoyable and unique take on the concept of an animal ABC book. I found myself surprisingly entertained at the sight of each new creative letter arrangement, and my kids enjoy seeing the masses of differently shaped letters. I think it’s even helping my not-quite-2-year-old recognize some letters of the alphabet! I’d definitely recommend it to others. Just be sure to buy it with the mindset of enjoying more for the charming graphic design, as well as for the potential ABC lessons; both the illustrations and the factoids should be taken with a grain of salt. Get yourself a copy of Alphasaurs and Other Prehistoric Types in the link here!