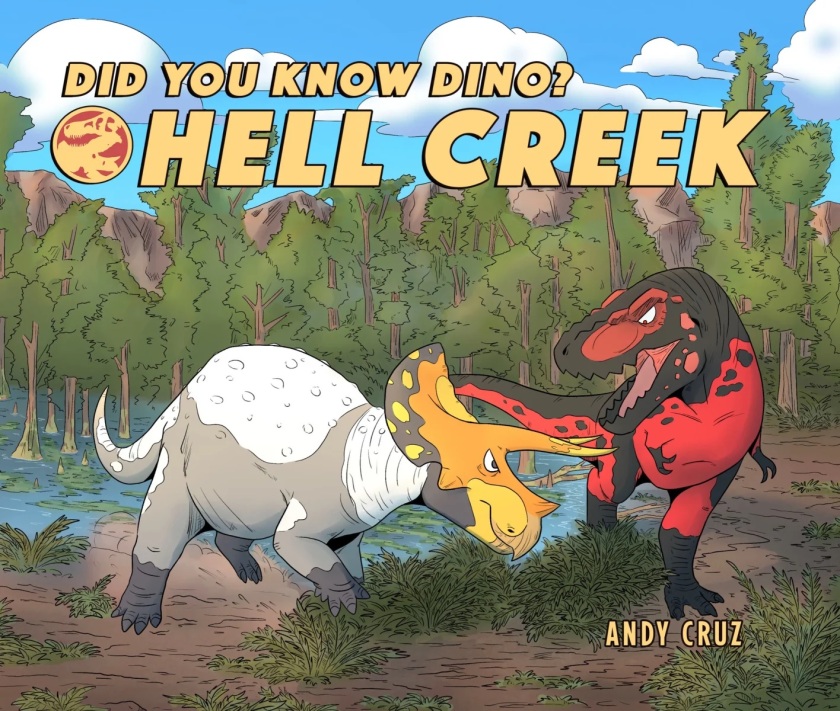 If you haven’t come across Andy Cruz already, he has been carving out a niche for himself with his educational Dinosaur Comics, which until now has largely lived on Instagram. Most of his comics belong to the “Did You Know Dino?” series (not to be confused with the podcast I Know Dino, who produced the book 50 Dinosaur Tales). A typical strip in this series focuses on a single dinosaur or other prehistoric species, and gives a brief introduction to them through several frames of Andy’s delightful cartoons.

Much to my excitement, Andy has just made the jump to his first print book, Did You Know Dino? Hell Creek. It actually got published via Ted Rechlin’s Rextooth Studios, who my readers may remember from my reviews of Ted’s books Jurassic, SUE, & Sharks: A 400 Million Year Journey. Rextooth Studios has actually begun partnering with other authors to help publish their work, starting with the updated edition of David & Jennie Orr’s Mammoth is Mopey (which reminds me: I need to update my review!). While it would have been easy enough to simply repackage his webcomics, Andy has opted to deliver all-new content to his readers and expand his scope to describing an entire paleo-environment, the titular Hell Creek.

Hell Creek is famous as both the home of Tyrannosaurus rex, and one of the last known dinosaur-bearing geologic layers laid down prior to the End Cretaceous extinction event. It’s certainly a popular subject in paleontological literature, and plenty has been written on it before. In fact, if I had to describe Did You Know Dino? Hell Creek in reference to other books, I would say it’s basically Saurian – A Field Guide to Hell Creek by way of Abby Howard’s Earth Before Us series. I don’t mean to suggest it is one and the same as the Saurian book, though there is definitely a similarity in structure. Saurian focuses on a particular moment in time, narrating as though one is visiting a particular locale in Hell Creek, while the Did You Know Dino? book takes a broader view, looking at the formation as a whole. It also hits a perfect sweet spot of factual accuracy with easy to digest illustrations & tidbits of information. But don’t mistake its seemingly light-hearted appearance for softness; Andy isn’t afraid to portray the more gruesome sides of nature when necessary, as one can see in the Ankylosaurus image I’ve shared above. There’s no rose-tinted glasses, here!

The level of detail does vary depending on the type of creature presented. Non-avian dinosaurs get a small profile with basic stats, followed by a few pages of further descriptive text and slice-of-life illustrations (or cartoons when useful!).

Less popular creatures get a single illustration and an interesting fact or two in a nearby box. I for one am a big enough nerd that I would have enjoyed seeing all creatures get equally in-depth treatment, but I understand I am in a bit of a minority, there. (For my fellow nerds who’d also like to learn more, I recommend following the book’s scientific consultants Hillary McLean & Scott Johnston, as they often post about their paleontological work on social media.)

I enjoy Andy’s style and I am happy to see his work in print form. While Did You Know Dino? Hell Creek treads some of the same ground as the Saurian Field Guide, they both stand enough apart from each other so as to not tread on each other’s toes. I do look forward to future books in this series, though, which will hopefully continue in the same vein and feature other formations that have received less in-depth coverage in popular literature. A “Did You Know Dino?” book all about the Morrison or the Kem Kem Formations would be fantastic, for instance. Did You Know Dino? Hell Creek does an excellent job in and of itself, however, and I happily give it my Dino Dad Stomp of Approval!