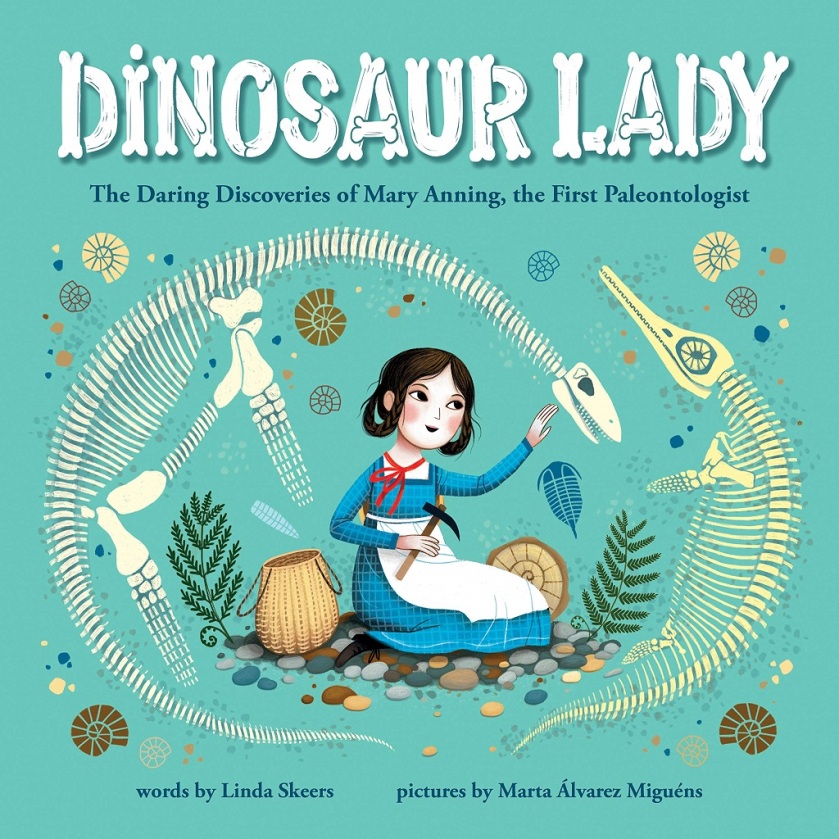 I’ve had occasion to feature Mary Anning several times here before, in both book format (Mary Anning’s Curiosity being a particular favorite), and even a pair of songs as well! It was with some excitement then that I discovered a preorder listing on Amazon earlier this year for a then-upcoming book titled Dinosaur Lady: The Daring Discoveries of Mary Anning, the First Paleontologist, written by Linda Skeers and illustrated by Marta Álvarez Miguéns. I reached out to Sourcebooks Kids, who were kind enough to send me not only the subject of today’s review, but an additional children’s book called Dinosaurs Can’t Roar! For now though, let’s see how Dinosaur Lady fares, especially compared to other Mary Anning titles.

Skeers gives a nice, relatively comprehensive overview of Anning’s life. Unlike some other books about our paleo protagonist, the story spans her whole career, rather than simply stopping after the discovery of her Ichthyosaurus. This means we also get to see some of her less charismatic discoveries as well, including her recognition of bezoar stones as coprolites, and her discovery of dried ink inside of belemnite cephalopod fossils. This extended look at Anning’s life also means her unfortunate exclusion from the Geological Society of London gets coverage as well.

The illustrations by Marta Álvarez Miguéns are quite enjoyable. They have a lot of charm and personality, and despite being very kid friendly, they are very precise with the scientific material. Marta even faithfully recreates some of Mary’s own notes and sketches in the illustrations, as well as a modern exhibit featuring Mary’s Rhomaleosaurus in the Natural History Museum in London.

I do have to point out a couple of errors, unfortunately. The most obvious comes from the title itself, since while Dinosaur Lady never outright claims she found true dinosaurs, the title certainly strongly implies it, though at least here it’s not quite as egregious as in The Dog That Dug For Dinosaurs. (For those not in the know, while Anning’s finds all hail from the Jurassic Period, Lyme Regis exclusively features oceanic deposits which contain many different sea reptiles, but no true dinosaurs. Might I suggest a reading of I Am NOT a Dinosaur?)

A second error concerns the illustration of Mary’s pterosaur skeleton. When Marta depicts Mary sketching the skeleton, it shows a very accurate recreation of the Dimorphodon holotype. However, when depicted excavating it in the field, the illustration instead depicts an oversized skeleton of Pterodactylus. We can perhaps chock this up to an error of omission in the text. While the author correctly states that researchers originally identified this skeleton as a form of Pterodactylus, she neglects to mention that they later realized it represented a significantly different species of pterosaur, and so placed it in its own genus, Dimorphodon.

Despite these two errors, even I managed to learn something from this book. I hadn’t previously realized that Mary and her brother initially found only the skull of her first ichthyosaur, and that the rest of the body was not found for nearly a year afterward. I also found out that said ichthyosaur played a larger role in discussions on the age of the earth than I had previously assumed. I had thought Charles Lyell had already published his seminal work, Principles of Geology, which really cemented the antiquity of the earth in scientific circles, but in researching the discourse around Mary’s fossils mentioned by Skeers, I found out Mary’s discovery preceeded Lyell’s book by nearly two decades!

Despite a couple of errors, I think I’d have to put Dinosaur Lady right up there with Mary Anning’s Curiosity as one of my favorite books about this fossil heroine’s life, thanks in no small part to the fact that it actually shows us a good portion of her life, rather than just her childhood. It’s definitely become the favored Mary Anning book among my own children as well. (In addition to the other books I’ve mentioned, The Dinosaur Expert and She Found Fossils both discuss her life as well, though she is not the focus of those books and gets a brief profile instead.) I am pleased to give Dinosaur Lady my Dino Dad Stomp of Approval, and I strongly recommend all my readers pick it up at their earliest convenience. I’m sure you’ll enjoy it just as much as my family and I did!