Today is just a little too late for Christmas, but if you’ve got some Christmas card money from a distant relation burning a hole in your wallet, then I suppose shopping season is still on! Our first post-holiday review concerns Usborne’s Build Your Own Dinosaur Sticker Book. Like the excellent Ultimate Dinopedia (my most popular book review so far!), this activity book is illustrated by Franco Tempesta, and paleontologist Dr. Darren Naish of the world famous Tetrapod Zoology blog and podcast provides scientific consultation. Marc Maynard contributed some additional illustrations, and Simon Tudhope wrote the supplemental information. 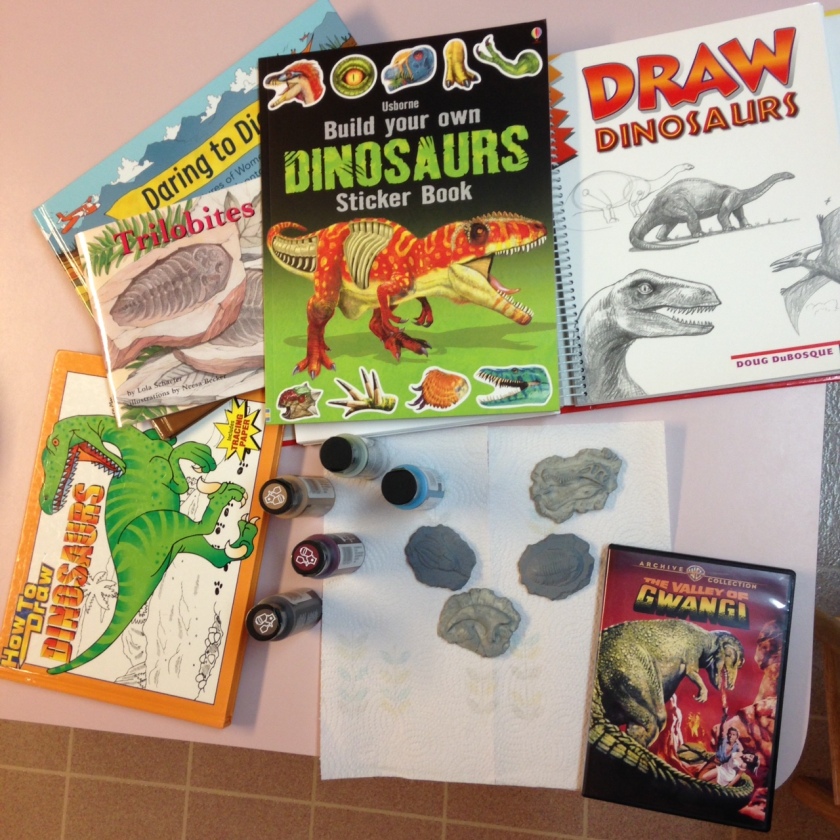 After I received my unpainted fossil magnets from Mike Tharme, I invited the neighbor kids over to paint them with me. Their family vlogs about daily life and fun activities they do together, so I thought this was the perfect opportunity for a crossover event between our two projects! I’ll post the video we recorded in this space when they release it, and consider subscribing to the Olmeda Family on YouTube for more of their videos! In any case, while the older kids and I enjoyed our painting project, I knew the 4 and under crowd wouldn’t be as interested, so I got a bunch of activities together for anyone who either didn’t paint or finished early. Of the painting group, Isaac finished first, and decided to work on the sticker book a bit, and agreed to be my model to show off some of the illustrations. Now, on to the review!

While Tudhope provides some brief introductions to each of the 20 animals featured in this book (only sixteen of which are dinosaurs, with two pterosaurs, a plesiosaur, and a mosasaur rounding out the cast), Tempesta is listed first on the publication, and his artwork is really what the book is all about. Each page starts off with these partial “X-ray” pictures of each creature, which the reader (builder?) completes with the sticker pages provided in the back. 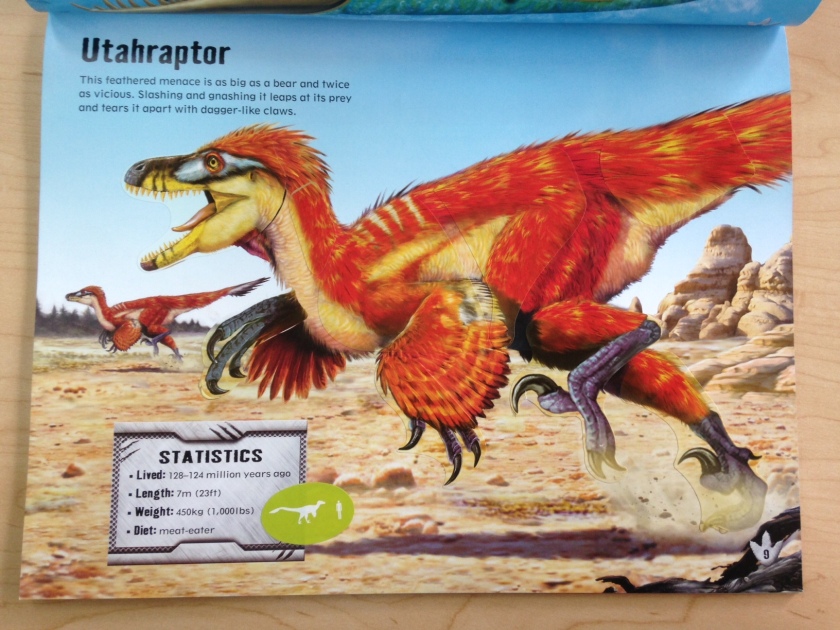 All the animals look very nice, whether skeletonized or completely fleshed out, and largely reflect our most current knowledge about these ancient beasts. The dinosaurs that should have feathers generally have very well rendered plumage (though the hands could perhaps be better covered at times), and there’s a great attention to detail throughout the book. Everything looks great when the stickers are properly applied, though this leads me to my main reservation about the book. I’m not sure if this is a point against the book or in its favor, but the illustrations look so nice, I find myself reluctant to actually let my kids do it themselves! My neighbor Isaac did a decent job with his Utahraptor (which I took the liberty of finishing for him after their parents called them home for dinner), but I’d almost feel bad letting anyone younger potentially mess up the illustrations with crooked stickers. I’ve actually ended up doing most of them myself, an activity I found surprisingly enjoyable. Who knows: we’ve got adult coloring books now, perhaps adult sticker books are the next new fad? 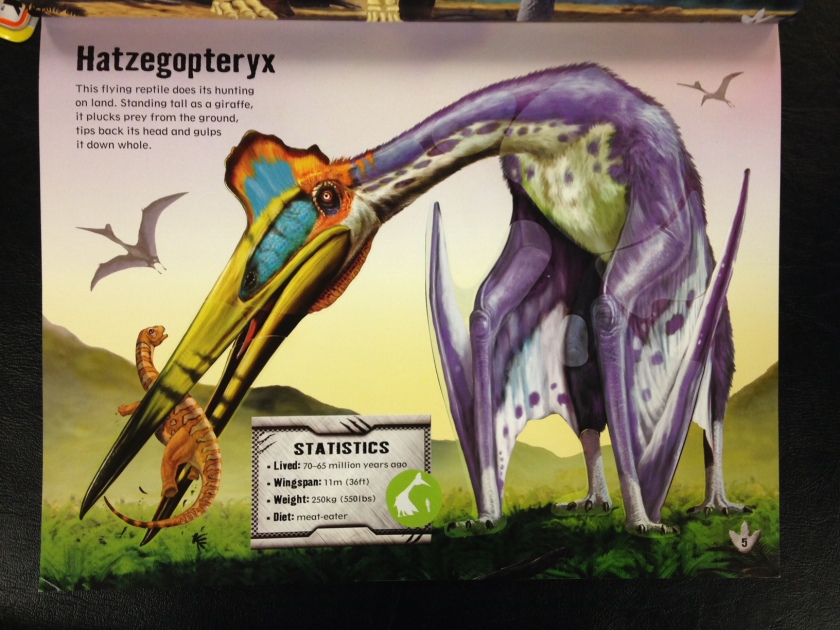 One fun discovery I made concerned two images that I’m pretty sure most betray Darren Naish’s influence on the project. Both the illustrations featured above clearly reference ideas directly traceable to Mark Witton, a well-known paleoartist and scientist who frequently collaborates with Naish on scientific research. The “giant pterosaur eating a baby sauropod” image has nearly reached the point of cliche at this point (Collecta even produced a toy version of the idea), but it originated with an illustration in Witton & Naish’s 2008 paper on azhdarchid pterosaurs (you can see the image in this overview of Witton’s work that Naish wrote up on an older version of his blog). The speculative fuzzy Pachyrhinosaurus also traces directly to an illustration by Mark Witton, which he accompanied with a blog post explaining his reasoning behind it. While not quite as common, it has inspired several other artists who have followed suit.

Well, that’s about all I have to say about that. The Build You Own Dinosaur Sticker Book has lovely illustrations, and I found it very satisfying to complete. While not aimed at the youngest kids, this still makes for a fun activity time. I even enjoyed working on it myself. I maybe recommend considering the skills and patience of your child before buying, but other than that, I give this a satisfied Dino Dad “Stomp of Approval”!

I can’t end this review without giving a little shout-out to the small business I purchased this book from! As with Jurassic Park Little Golden Book and Melissa & Doug Prehistoric Reusable Sticker Pad, I found it in the book section at Ben Franklin Apothecary in Duncanville, Texas. Ben Franklin’s is a classic corner drugstore which, in addition to the pharmacy, contains a gift shop, an old fashioned candy counter, a little cafe & ice cream parlor, and a sowing & quilting room almost as big as the rest of the store! The boys and I have made a habit of stopping by every so often, even just for a small bag of popcorn if I have no other excuse to be there. (In fact, my oldest has taken to calling the whole store “the popcorn place”!) We especially love visiting when Ms. Pat is working; we’ve all taken quite a shining to each other, and have started calling her our “apothecary grandma”. If you’re ever in the south Dallas area, be sure to stop on in and check it out! 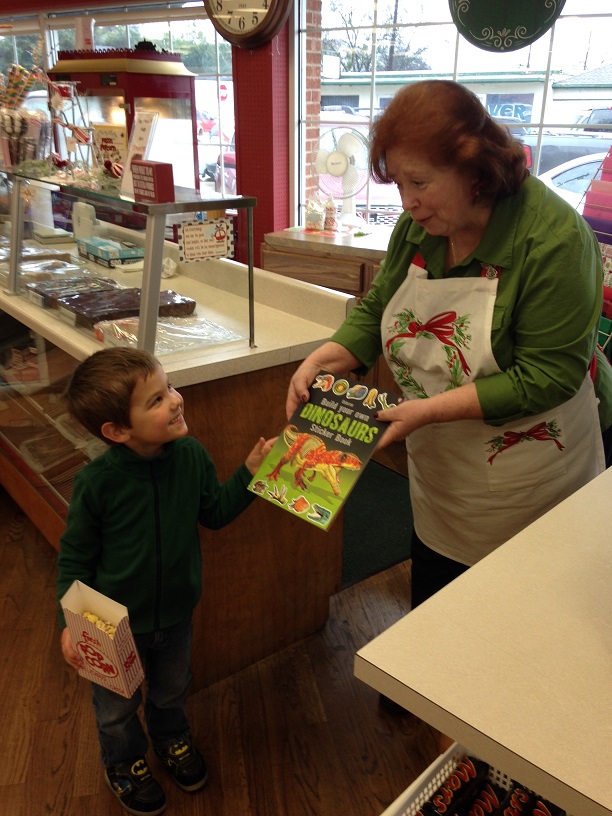