I was recently contacted by Mike Tharme of 3ArmCreations, who offered to send me some review copies of fossil replica magnets he makes. Now, if you remember my review of Cruisin the Fossil Freeway, I spent nearly half of it waxing nostalgic over childhood memories of a certain refrigerator magnet at my grandparents’ house. I’m also not one to turn down cool-looking swag, so of course I said yes, and a couple of weeks later, here we are!

I received four of his designs: a Spinosaurus skull, a dromaeosaur (or Velociraptor) claw, a trilobite, and a crinoid (AKA sea lily, an extinct relative of sea stars). Mike offers many more designs on his Etsy account 3ArmCreations, including (among others) a Jurassic World inspired Carnotaurus skull, ammonite shells, and not just a Tyrannosaurus skull but an entire T-rex skeleton you can “assemble” on your fridge!

You can purchase all the products offered at 3ArmCreations fully painted, my favorite pattern being the T-rex Skulls with the “Steven” finish, which looks very much like the logo of a certain dinosaur movie franchise. Mike also sells them unpainted as well, as is the case with mine (but more on that in a minute). Unpainted copies are less expensive, and likely to get to you sooner as Mike completes all the painted ones by hand, and when there’s high demand a backlog can sometimes build up. Don’t worry if the idea of painting them yourself seems at all daunting to you; Mike has posted videos of his painting process with tips you can follow over on YouTube.

I’m very pleased with the fossil replicas I received. They display a very high fidelity to the nature of actual fossils, and look very nice even sitting here before me still unpainted. While constraints of production mean these aren’t necessarily based on specific specimens, Mike carefully compares numerous sources to produce an idealized version of the taxa represented that perfect balance production demands, accuracy, and aesthetic. (For example, in the case of the famous Spinosaurus, all the known skulls are so fragmentary it’s necessary to look to its closest relatives to get an idea of its basic shape.) A fun bit of behind-the-scenes info: in a chat I had with Mike over Skype, he said that whenever small errors creep into the molding process, he likes to actually incorporate them into the final product to simulate the cracks that naturally appear in real fossils! I thought this was a clever way to avoid waste, and to make some of the individual magnets a little more unique!

I initially thought perhaps the dromaeosaur (AKA “raptor”) claw could have been perhaps a touch longer and more recurved, but upon looking up actual specimens it seems about right to me. I think I had based my assumption on suggestions of what it would have look like with its keratin nail sheath, which would have increased its length in life. One can definitely see Mike’s attention to the little details with this piece, including the groove along the side, and the processes at the base where it would have attached to the foot.

I’ve mentioned before my love of trilobites. I love these adorable paleo-bugs! They’re like the roly-polies of the sea. (See here for my review of a trilobite book.) The 3ArmsCreations replica looks to me like Olenus or something closely related; I like this choice as opposed to the more common Calymene. The swooping wings of the headshield makes for a more iconic look. High marks for clearly defining the division between the thorax (main body) and pygidium (tail)! It would’ve been very easy to just carelessly taper the main body down to a point, but if one looks at the fossils, one will note that the last few segments in a trilobite are always fused into a clear tail, known as a pygidium to trilobite specialists.

I made a special request for the crinoid (or “sea lily”) fossil as I arranged the delivery with Mike. While some might think these extinct sea star relatives as somewhat uncharismatic, I think sea lilies posses a strange alien beauty that deserves wider recognition. I sometimes like to listen to a jazz song called Devonian Lift while closing my eyes and imagining an underwater field of sea lilies lazily waving in the current as ancient sea critters dart and scurry about them. (I’m pretty sure the musician didn’t mean THAT Devonian, but hey, I’m gonna run with it!) 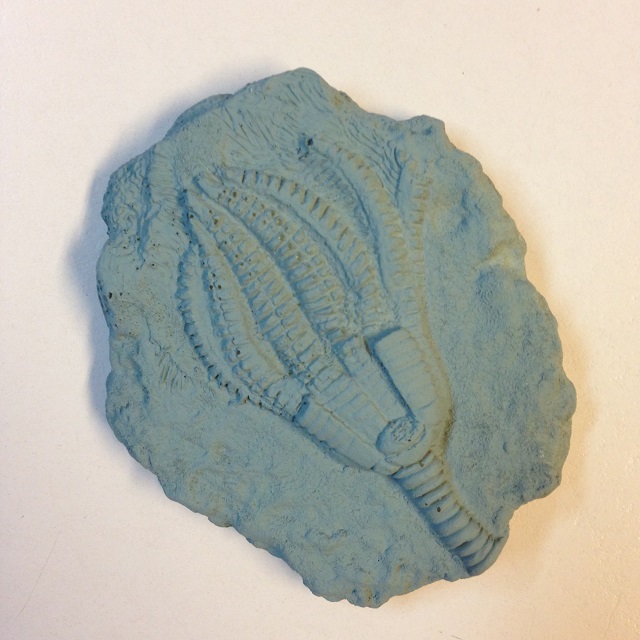 As I mentioned before, while I just got these four for now, there’s a whole range of other fossil replicas available for purchase, and Mike hopes to expand the line with representatives of as many different kinds of prehistoric critters as possible! He told me he’d love to see people of all ages create an entire “natural history cabinet” of sorts on their fridges, arranging fossil magnets almost as one would ABC magnets. He would love to see these as a sort of ongoing scicomm for youngsters, who, perhaps inspried by a museum trip, could use these not only as magnets but as references and inspirations for their own projects and research into these fascinating organisms.

I especially see that potential if one buys the DIY versions to paint at home. I’m actually planning on inviting the neighbor kids over to paint these with my boys and make a whole activity time out of it! I can’t wait to see what patterns we come up with! Mike actually pitched the idea of review centered around an activity time when he first approached me with this idea. I’d actually been looking for an excuse to blog about paleo-themed activities for a little while now, so I’m excited to make these the subject of my first such post. I would’ve included that in this review, but it will have to wait until schedules jive, so I figured I’d at least write this initial review so as to not keep Mike waiting on his investment in me! Thanks for thinking of me!

I’ve included plenty of links to Mike’s Etsy account throughout this review, but be sure to follow him on social media as well, where you can keep abreast of updates to his stop-motion animation project “Wildlife on Mars”. Mike has a passion for stop-motion, and even met effects legend Ray Harryhausen himself shortly before he died! In fact, it was the storyboard for this very short film audience that won Mike audience with the maestro. Ray expressed great interest in the project, giving Mike some pointers, and following up with him several times about the possibility of developing the film further, though his untimely death sadly prevented any further collaboration. “Wildlife on Mars” is still in production though, and all sales of these magnets go towards funding the project, though if you feeling like making a more substantial direct contribution, check out Mike’s GoFundMe page and donate a few bucks! You can find Mike on Twitter, Instagram, and YouTube, so go give him a follow on your preferred platform.

Don’t forget to follow me on Twitter and Instagram as well! I’ve been kinda dormant on my YouTube channel lately, but Part 2 of this review will include video of our activity time, so I’ll be uploading there again soon. In the meantime, I hope you enjoyed this review, but more than that, I hope I inspired you to pick up a few of these magnets for yourself! They’ve definitely earned the Dino Dad Stomp of Approval! I may even buy more for myself sometime in the future. Don’t forget to keep an eye out here for Part 2 very soon!