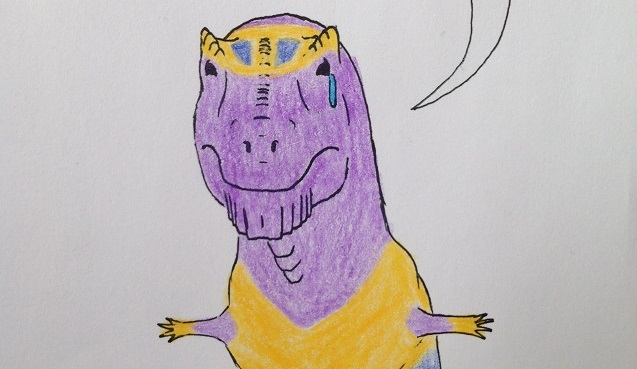 So you may have heard that there’s a new dinosaur now named after the Marvel Comics character Thanos. The news has been met with… mixed reviews by some dinosaur fans. The bones are distinctive enough to be assigned to the Abelisaur family of theropod dinosaurs, (of which Carnotaurus is the most famous member). However, the fact that it’s based on only two vertebrae had some suggesting they should have waited for more complete finds before actually naming it.

Others have pointed out that if it does indeed belong to the Abelisaur family, then that lends a strong dose of irony to the name. One of the villain’s more famous lines from Avengers: Infinity War has him boasting about the power he could wield from a mere snap of his fingers. As it happens, one of the defining features of abelisaurs are their ridiculously atrophied arms, even smaller and more useless than the famously tiny arms of Tyrannosaurus rex! The fingers themselves would’ve practically been stubs. Needless to say, I found this prime fodder for a couple of cartoons I simply had to sketch out. I present, without further ado, Thanos Trying. (More after the images.)

So now you know what I’ve been up to for the past few days instead of working on my next book reviews. I’ve been having too much fun in the paleo-themed internet meme Facebook groups! Your regularly scheduled programming will continue shortly.  I’m very excited about the next few books I have for you! Most likely we’ll be looking at I Am NOT a Dinosaur! next time, though I’ve got a fun activity project planned as well which I may end up doing first. Follow me on Instagram and Twitter for updates, and other silly stuff like this. Meanwhile, check out my other most recent reviews! My boys really love The Nature Timeline Wallbook!