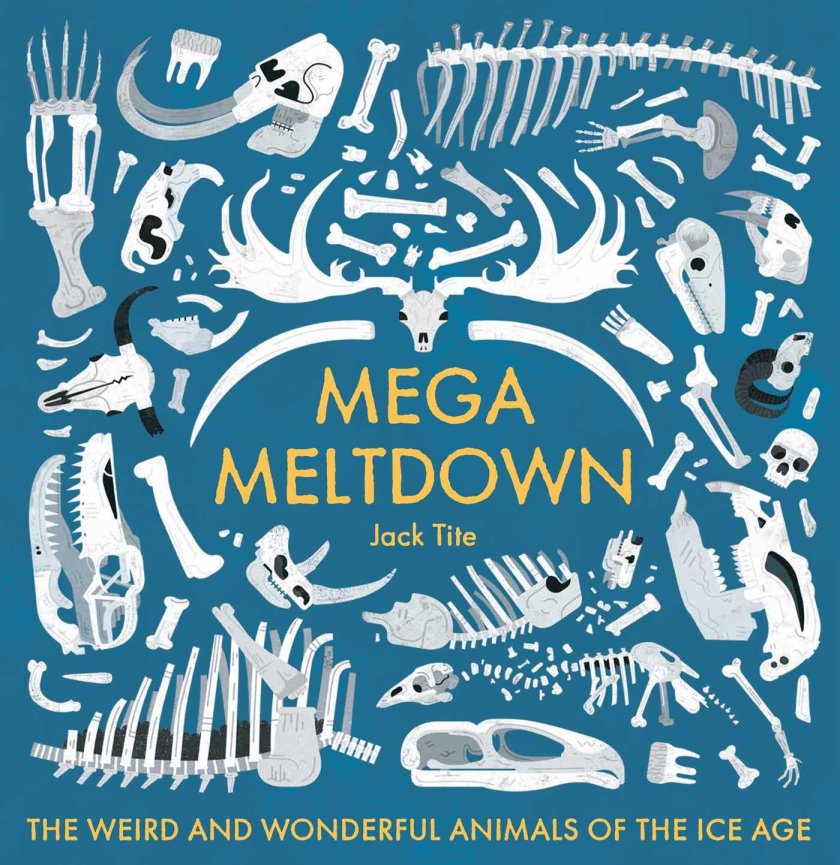 I feel like I haven’t done much with Cenozoic life on this blog. I’ve explored… er, Mammals! Explorer, and Once Upon A Mastodon is an excellent book for younger readers, especially considering that it’s a Cat in the Hat tie-in. Abby Howard’s comic Mammal Takeover! takes a broad look at the Cenozoic Era, while Mike Keesey’s Paleocene takes an intimate look at the scrappy survivors of the End Cretaceous extinction. Additionally, some books have sections about Cenozoic mammals, such as Kaleidoscope of Dinosaurs and Prehistoric Life. Overall though I don’t have as much here as one might expect. So to rectify that inadequacy, let’s take a look at Jack Tite‘s Mega Meltdown!

Mega Meltdown takes readers on a global tour of the Pleistocene Epoch, looking at exemplary animals from around the world and how they fit into the various environments of the time. Tite divides the book into five sections based on major geographic regions: North & South America, Eurasia, Australia, and Africa. Tite’s illustrations are reminiscent of the vector style illustrations employed by James Gilleard in Dinosaur Atlas & the Dinosaur Fold-Out Timeline, with bold colors and crisp, solid shapes. As a general rule, the book devotes 2-4 pages at a time to various model organisms, sometimes focusing on a specific species, as in the case of the American Mastodon, and sometimes using one species as a lens through which to view more general groups, such as the pages that feature Megatherium, which often compares & contrasts it with its fellow ground sloths.

Several pages throughout the book have a life-the-flap component, expanding or sometimes even transforming the depicted scenes. Cave systems stretch further on, skeletons become flesh & blood animals, and dogs pawing at the ground reveal a preserved mammoth underneath. I like the design, and there’s a reasonable density of interesting information, both about classic topics like the La Brea Tar Pits, and more obscure topics (such as glyptodont huts) that may be new to those less familiar with the Ice Age.

While most of it is excellent, I do have a couple criticisms for the book, though neither really breaks it. A page captioned “Teratorn” (a family of plus-sized Pleistocene condors) is placed in the North America chapter, and while the type genus Teratornis is indeed found in North America, the text explicitly identifies the genus depicted as Argentavis, which as the name suggests, hails from Argentina, South America. Simply relabeling the species would have fixed this issue. Alternatively, one could have swapped this page with the Smilodon page, as the famous sabertooth cat had a pan-American distribution, and thus could go in either North or South America.

A bigger criticism however, and one that maybe does tarnish the book a bit, regards the Africa chapter. While some are fond of regarding Africa as something of a Pleistocene refugia which retained most of its megafauna, the author almost completely ignores any unique animals he could have included. The chapter’s cover page does actually depict a deinothere (an elephant relative) and a sivathere (a relative of giraffes and okapis), however the few pages in this chapter focus exclusively on human origins & migration. To be fair, this particular topic is adequately addressed, but it does little to assuage the my feeling that we got short-changed by this chapter. It could have included a few extinct Madagascan creatures at the very least! (Small and Tall Tales of Extinct Animals can fill in a bit here, though, if you feel this absence particularly keenly.)

Those criticisms aside, however, I rather like this book. I actually think I can take the comparison of this book to Dinosaur Atlas to a deeper level than a simple similarity in artwork. I think this book could be regarded as the Pleistocene/Ice Age equivalent to Dinosaur Atlas. Taken together, they extend the range of life & time that readers can experience further than either book can on its own, in both a similar tone and art style. If this Dino Dad approved book has piqued your interest, then give Mega Meltdown a look for yourself! If you want to see more of Jack Tite’s illustrations, be sure to check out his website & his Instagram.