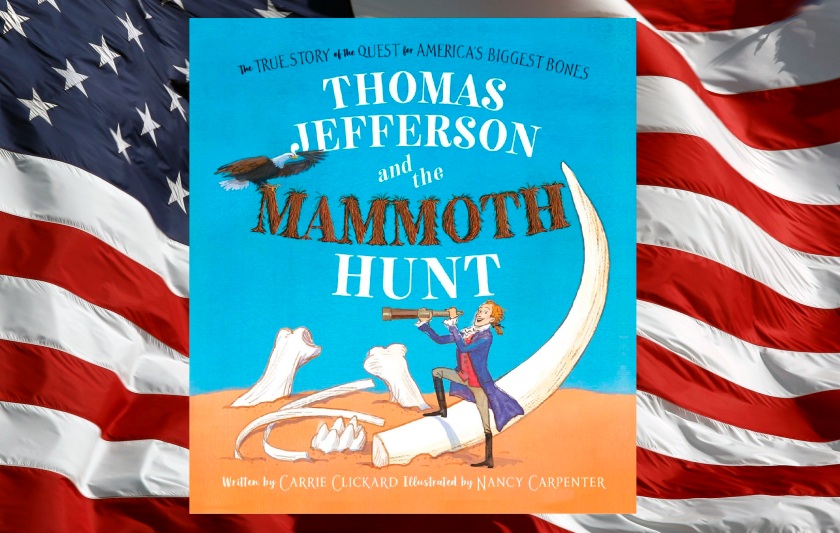 With U.S. Independence Day here, I thought it might be nice to look at a little bit of Americana this weekend. While on vacation at Mammoth Mountain in California last summer, I happened to find a book in a local shop called Thomas Jefferson and the Mammoth Hunt, which told the story of early developments in American paleontology.

It’s a very light-hearted book, written in rhyming prose that makes it very fun to read aloud, augmented by the bright, colorful illustrations. Both words and pictures mostly depict the events of the story in a semi-metaphorical manner, such as Jefferson chasing after the dismissive Count de Buffon to harangue him on his dismissive attitude towards American wildlife, all while riding on their respective Old and New World pachyderms.

However, there is at least one scene that is a reasonably faithful recreation of a historical event. Charles Peale’s famous waterwheel-aided excavation of the mastodon skeleton at Masten’s farm makes its obligatory appearance, showing the diverse ingenuity of the early science enthusiasts who .

Incidentally, it should be noted that Jefferson famous fossil specimens represented mastodons, not mammoth bones, strictly speaking. As the book explains, this is due to the fact that the differences between mammoths and mastodons had yet to be sufficiently nailed down, and some people (Jefferson included) used the terms interchangeably.

The story does accurately portray how the question of American natural history became a minor point of national pride, as some of the founders feared that the Count de Buffon’s disdain for America’s ecology might discourage people from emigrating to their fledgling country.

Additionally, while Founding Monsters went into greater detail in the actual text of the story, this book does mention more of the known enslaved people who contributed to this history in the author’s note at the end. Moses Williams (who was described more thoroughly in Founding Monsters) appears, along with Jefferson’s domestic slaves Jupiter Evans & Robert Hemings, and the sole African-American member of the Lewis & Clark Expedition, York. The author laments that we do not know more of their contributions, or what they thought about the fossils they helped to handle, a sentiment I can’t help but share.

Overall, Thomas Jefferson and the Mammoth Hunt is a fun storybook that presents a little-known part of America’s early history in the study of paleontology. It makes for a good union of science and history that young paleonerds are sure to find entertaining. I recommend it as a fun tie-in to your Fourth of July Festivities. For some more mammoth-related attractions that I also visited on my trip last year, check out my reviews of the La Brea Tar Pits and Museum and the Western Science Center.