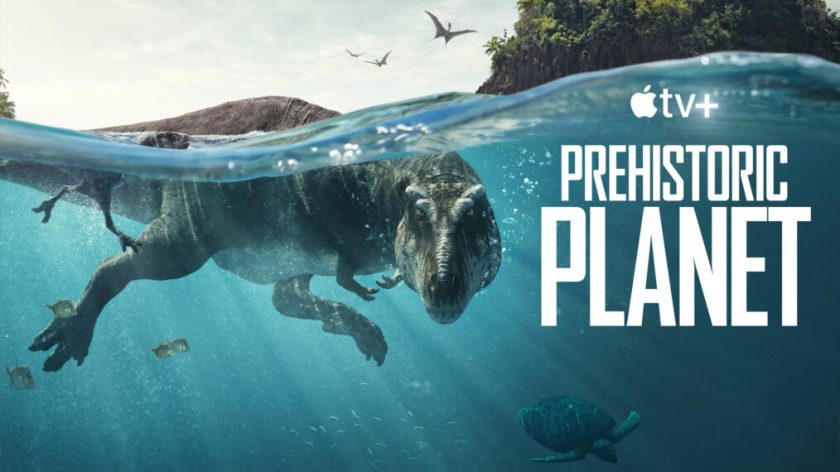 So ends a whirlwind of a week, and I imagine the end of many people’s AppleTV+ trials. It seems fair to say that Prehistoric Planet has captured the hearts and souls of an entire generation of dinosaur lovers, in a way no other paleontology documentary has accomplished since the legendary Walking With Dinosaurs series first aired over two decades ago. Created by a veritable who’s who of big names in the fields of film, science, and art (including Jon Favreau as producer and Hans Zimmer for the score), this five part series garnered an avalanche of praise as it aired on AppleTV+ over the past week.

This series may have inherited its throne from Walking With Dinosaurs, but it also descends from the lineage of documentaries inspired by Planet Earth, especially as it shares with them the inimitably enthusiastic narration of Sir David Attenborough. Much like Planet Earth and its descendants, Prehistoric Planet consists of five episodes themed around several different biomes, giving us a glimpse at the similarities and differences between them across the globe. From Coasts, to Deserts, Freshwater, Ice Worlds, and Forests, there’s plenty of variety to be found.

This gives the show creators plenty of opportunity to introduce viewers to a wide array of dinosaurs both familiar and strange, brought to stunningly convincing life by some of the best CGI work I’ve seen. One easily forgets that we are not viewing living animals here; it often feels as though all of it was all simply shot on location as a traditional wildlife documentary. Velociraptor, for example, moves exactly like a large predatory ground bird, with all the little tics and quirks of movement that characterize the living animals, which does as much to convince viewers of its reality as the high resolution CGI models do.

Even the stranger elements served to make the prehistoric settings feel more present and real. In a world where all of us have seen bizarre animal behaviors captured not only in other nature documentaries but on our own cell phones, one can only say “Why not?” when we see a father Tyrannosaurus leading his chicks across a narrow channel to a protostegid turtle carcass he smelled on a nearby island, or a pack of Velociraptor hunting along cliff edges like snow leopards. In many ways it feels like the cinematic adaptation of All Yesterdays, a book written by one of the show’s lead experts, Darren Naish, along with John Conway and C.M. Koseman, which ruminated on the things we don’t know but can reasonably speculate on about prehistoric life. In fact, Prehistoric Planet lifts two scenes directly from the pages of the book, in particular the water-treading contest of male elasmosaurs, and the arm display of Carnotaurus.

I also appreciated the way in which the animals were often played against the stereotypes many of them have acquired from years of lazy convention. Thoroughly rejecting the image of helpless, lumbering mountains of meat, sauropods finally get their chance to shine in all their Lovecraftian glory as unstoppable kaiju in their own right, just as imposing as the most intimidating carnivorous dinosaur, if not more so. On that note, the carnivores themselves are allowed to act very naturally, killing only to satiate hunger, rather than demanding a battle from anything and everything in sight. I even learned to appreciate a new side to the ungainly-looking Therizinosaurus, in a moody, even mysterious scene that imparts upon it a presence as regal as any sauropod.

I also must recommend the special videos included on the show page that delve into the science behind each episode. If you find yourself with questions about what’s shown on-screen, there’s a decent chance one of these shorts has the answer.

My few criticisms with the show itself mostly have to do with pacing. The individual segments within each episode tend to feel very brief, and when taken all together make the episodes overall feel shorter than they really are as well. It would have been nice to spend a little more time on each story, to give them slightly more room to breath. A few species, such as T. rex and Barbaridactylus, do appear in more than one episode, and the extra time spent with these ones makes them feel much more fleshed out that others. I also feel that most episodes ended rather abruptly, leaving me with a vague sense of being left hanging despite not actually ending on a cliffhanger. I suppose I would mind so much if this were a longer-running series, but with only one planned season of five episodes, I felt the desire for more even more acutely than I might otherwise have had.

(I have seen a few social media posts that suggest certain creature designs were… let’s say “heavily inspired” by the work of certain paleoartists who were not credited, but I’m waiting to learn more about the production before I say much more about that.)

Expanding our focus from show to platform, while I’m grateful that AppleTV+ gave this beautiful series the support it needed to come to life, I can’t say I’m particularly impressed with the service. The necessary app is incompatible with and thus not available for several devices, including my Roku TV. Frustratingly, it seems some Roku models support it, while others don’t, and yet there was “AppleTV+ Screeners” app that WAS available on my model, for use by credentialed members of the press only. I was able to make do with my computer, though, and I personally had no problem getting it to run on there. However, many (including myself) have noted a not-insignificant dip in video quality when played on non-Apple devices. My computer does not have a significantly lower resolution than my iPhone, which leaves me suspecting possible intent behind it. All that to say, these issues have the cumulative effect of limiting access to the show, giving it a more limited reach than it might have had on a less exclusive platform.

Such is the strength of Prehistoric Planet, however, that I all but forgot any frustrations I had with the streaming service as soon as I started watching. It has made an indelible impact on not only myself, but the entire community of paleo enthusiasts. Fanatical meme generation is a clear sign of either intense love or intense mocking in the always-online era, and one can find no end of loving memes produced by the so-called “Paleosphere”. (We paleo-nerds have apparently collectively decided to refer to the father T. rex as “Hank”, after the dad in the TV show King of the Hill.)

All in all, I cannot recommend Prehistoric Planet enough. This is the one dinosaur documentary everyone MUST see. If it is ever made available for hard copy purchase, you can expect that all my birthday presents to friends & family will include this in them for some time afterwards. It is beauty, mixed with power and pathos, and it has set the new gold standard that all paleo documentaries will be measured against for years to come. My overwhelming sense of gratitude goes out to all the people who worked to make this project a reality, especially to the under-recognized VFX artists who put in all the heavy lifting in the actual production of the series. I hope the success of this project inspires many more of equal quality in the future!

Incidentally, if the conclusion of this show has left you feeling like the meme below, check out some of my other reviews for ideas on getting your paleo fix! See my Media Recommendations page for interesting viewing and listening experiences. Europasaurus: Life on Jurassic Islands is the closest a book has ever come to replicating the feel of a WWD-quality dinosaur documentary. While I reviewed David Armsby’s first dinosaur short, Sharp Teeth, I have yet to review his much more detailed Dinosauria Series, which I’ll say now is a fantastic piece of independent animation.