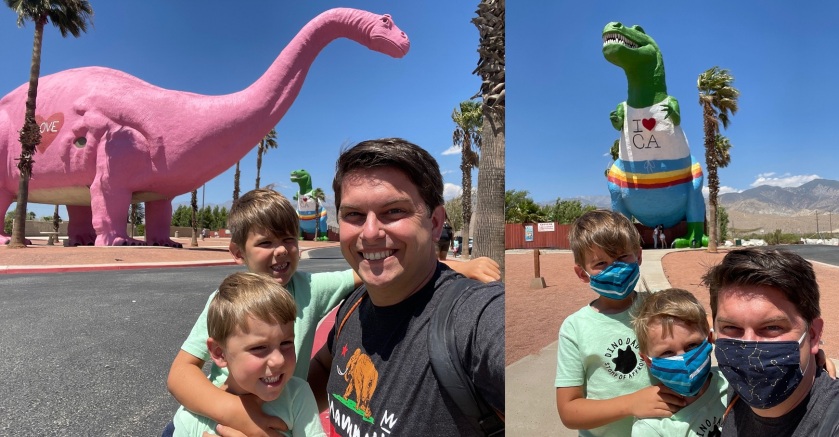 If you’ve ever made the drive from Orange County out to Palm Springs, California, you may have noticed a pair of large, concrete dinosaurs from the highway. Though development over the past decade has somewhat obscured the view of them from the road, they are nonetheless road trip icons, and an exemplary relic of so-called “California Crazy” pop architecture. These are the famous Cabazon Dinosaurs, a giant Brontosaurus and Tyrannosaurus which visitors can actually climb up inside.

While some of my readers may remember these enormous concrete sculptures from Pee-wee’s Big Adventure, their history goes far beyond that film. Created by Claude Bell, who worked for many years as a sculptor and artist for Knott’s Berry Farm (not to be confused with Claude Coats, an artist and Imagineer who worked for Walt Disney), “Dinny the Dinosaur” (the Brontosaurus) was originally built to attract customers to Claude’s Wheel Inn Restaurant, and contains a decently sized gift shop inside its enormous belly! “Mr. Rex” was added later, who is again hollow, but in this case acts as a lookout tower, with visitors able to peer out through it teeth!

This was how things sat for many years. Claude apparently planned to add a mammoth to the set, but never got around to it before his death in the early 90s. The property was later sold to a creationist group, who encircled Mr. Rex with a small, admission-only dinosaur park called the “Dinosaur Walk” which included a bunch of mass produced sculptures and animatronics. While the creationist aspects have since been removed, paying to enter the dino park is still the only way to access the stairway up into Mr. Rex.

I last visited during my extended summer trip to California. I had noticed it sat about 45 minutes north of the Western Science Center, and since both attractions are over an hour’s drive from Orange County, I decided it would be most efficient to visit both on the same day. While I have stopped to take pictures of the two stars multiple times in my life, I had not ever done the Dinosaur Walk before. Now, perhaps coming immediately from such a well-done museum as the Western Science Center set me up for a negative opinion, but I personally did not find the Dinosaur Walk at all worth the cost of admission. While the boys enjoyed a dig pit activity that had the bonus of essentially guaranteed prizes, there’s not much to recommend about the park. I recognized the vast majority of the statues from multiple other cheap dinosaur themed attractions and events, and many of them were repeated multiples times along the trail. While some animatronics were present, they can only be found inside an additional gift shop, which vaguely attempts to look like you’re entering some sort of Flintstones cave house before suddenly giving up on the idea once you’re past the entryway. A gemstone panning trough just outside requires the extra purchase of a bucket dirt and goodies to sift through.

Really the only reason to buy a ticket is to access Mr. Rex. I did enjoy finally getting to clamber up inside the giant tyrannosaur, and the boys and I had a blast roaring through its teeth at passing tourists down below. I don’t plan on spending the $11-$13 dollars per person to do it again, however. Even with my wife staying home that day, the cost added up pretty quick. Even just adding a playground themed similarly to Fossil Reef Park would go a long way towards making it feel like a slightly better value experience.

The original Cabazon Dinosaur statues are indeed road trip icons, and should you ever find yourself on the highway out to Palm Springs, it is practically a ritual requirement to stop and take a picture with the giant dinosaurs in the background. I do recommend checking out the gift shop inside Dinny the Brontosaurus, if only for the novelty of it, but I definitely recommend against actually paying admission to go inside the park and Mr. Rex. Save your money for souvenirs, or admission to some other California-based prehistoric attraction! (For some ideas, check out my reviews of the La Brea Tar Pits, the Western Science Center, and the Alf Museum of Paleontology.)