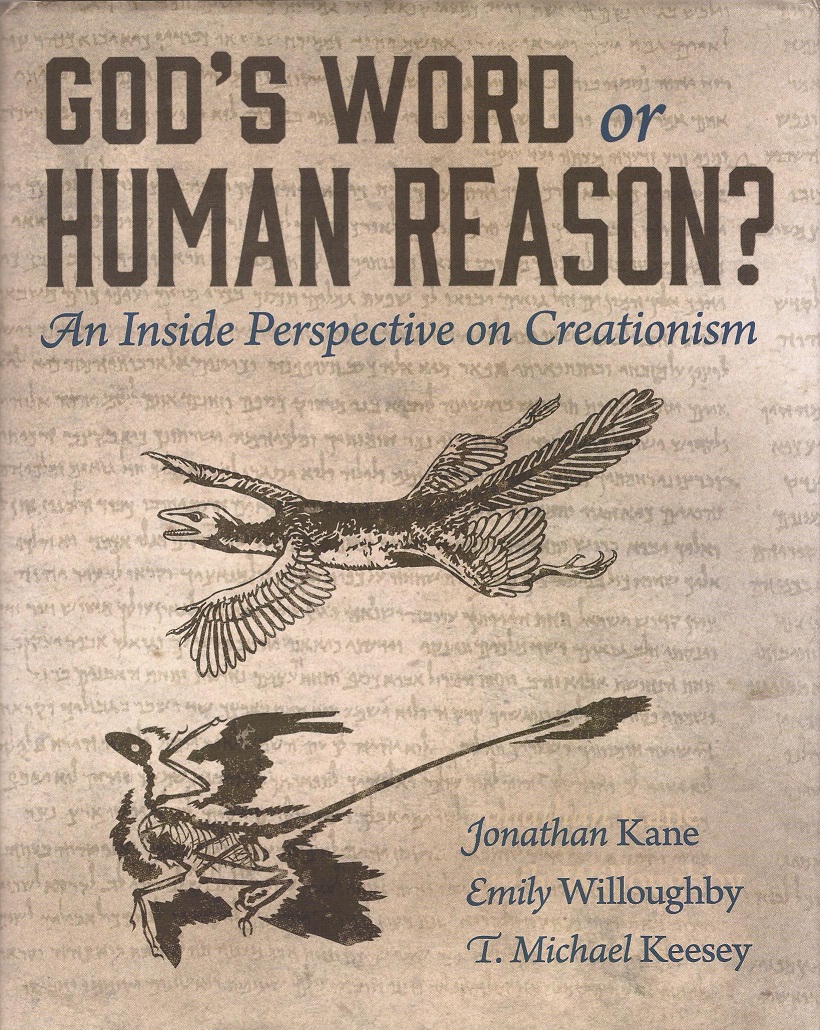 I recently visited the ICR Discovery Center, a creationist museum local to me in the Dallas area.  I made clear my disagreement with the core principles of the center, but opted not to unpack that very much in that particular review.  Instead, I figured this gave me the perfect excuse to finally get around to reviewing one of my favorite books on the topic of creation and evolution, titled God’s Word or Human Reason?  I’ve reviewed several books on evolutionary topics before, as well as the explicitly Christian Dinosaur Devotions, so the time certainly seems ripe for it either way.

As former creationists, the five authors of God’s Word or Human Reason? set it apart from other books on the creation/evolution controversy.  The authors’ extensive personal histories attempting to reconcile the young earth creationist (YEC) paradigm they inherited with the scientific subjects they avidly pursued give them perfect insight into the mindset of creationists.  The various authors represent multiple walks of life as well: Glen Morton and James Comer still remain Christians, Jonathan Kane identifies as a deist, and T. Michael Keesey & Emily Willoughby identify as atheists.

Each of the five authors covers a particular subject of major concern to creationists (two apply exclusively to young earth creationists, while the other three apply to both young and old variants as well).  Former creation scientist Glen Morton lays out the geologic evidence for an old earth, Emily Willoughby explains the physical laws that undergird radiometric dating, Jonathan Kane examines the broad spectrum of transitional dinosaur and bird species, T. Michael Keesey examines the anatomy, genetics, and paleontological evidence that point to our shared ancestry with the other great apes, and James Comer introduces readers to non-YEC readings of Genesis.

I wouldn’t be able to do justice to their arguments by summarizing them all here, but often the most telling sections of these chapters involve simply comparing creationists’ own statements with each other.  Morton, echoing Phil Senter’s excellent review paper The Defeat of Flood Geology by Flood Geology, points out that while all YECs claim at least some portion of the geologic column represents deposits from Noah’s Flood, none of them agree perfectly on which layers it correlates to.  In fact, it turns out the major creationist organizations have collectively ruled out the entire geologic column between themselves.  Similarly, no two creationists can seem to agree whether a particular fossil avialan represents a bird or a dinosaur, or whether a particular hominin represent a human or an ape.  While under the traditional evolutionary paradigm the status of these transitional forms come down to a mere question of degree, they should give serious pause to the creationist who thinks that one organism “clearly” cannot evolve into another.

Each author follows their chapter of expertise with a brief chapter recounting their personal histories with creationism.  As a former creationist myself, I identify with the palpable frustration behind their stories.  Glen Morton’s treatment at the hands of his fellow creationist scientists during his attempts to reconcile the geologic data with a theologically approved timeline makes me downright angry on his behalf.  I find these chapters just as valuable as the hard science, as in my experience, the creation/evolution “debate” often seems to hinge on emotional commitment to certain worldviews, and that the science is best utilized as a means to encourage introspection and open up mental roadblocks.

To that end, I’m very pleased they also decided to include a chapter on theology, and on how a “straightforward” reading of the Bible is never as truly straightforward as creationists like to think.  James Comer gives a good presentation of the distinction between the creation stories in Genesis 1 & 2, on the clear non-literal intentions of the Biblical genealogies (as acknowledged by a Morris & Whitcomb in their seminal book The Genesis Flood), and the translation gymnastics done by creationists to support their preconceived interpretation.  Comer includes a particularly startling quote from Snelling & Boyd’s Grappling With the Chronology of the Genesis Flood, demonstrating their willingness to radically redefine a basic aspect of Hebrew grammar structure merely to preserve their personal sense of the structure of Genesis.

I do feel Comer’s chapter could have been a little stronger, though it’s hard to put my finger on how exactly.  I think this boils down to the fact that while Comer points out specific areas where creationist organizations tend to read the Bible wrong, he doesn’t quite lay out a framework by which readers can get the Bible right.  Perhaps I’m missing something in Comer’s chapter, but if any of my readers similarly feel an apparent lack of a theological template, I highly recommend Joel Edmund Anderson’s The Heresy of Ham, which goes into greater detail on the genre of Genesis, and how that relates to the type of message it intends to convey.  (On a somewhat tangential note, I found it odd that the book’s description refers to all the authors as former creationists, while Comer’s personal testimony suggests young earth creationism was never a significant part of his life.)

While Emily Willoughby is one of my favorite artists, and I’ve shared some of her best work in the book here. However, a few of the illustrations clearly date to an early period in her career.  They don’t look particularly bad, but the difference between them and her more recent work seems pretty clear to me.  Given the nearly decade long gestation this book had, I assume these were produced specifically for the book early on, and Willoughby didn’t feel like letting them go to waste.  That’s certainly understandable if that is indeed the case, though it would have been nice to see some of these older ones swapped for more of her work from recent years.

I don’t mean to sound too harsh, but I want others to see Willoughby at her best.  I suppose I’m sort of emotionally invested in her art, since it was a pair of Deinonychus portraits (see below) she made over a decade ago that tipped the first dominoes on my journey out of creationism myself.  Fully caught up in creationist pop-science articles, I dismissed news of feathered dinosaurs as “obvious” hogwash, an attitude made all that much easier by the off-putting and ugly “tarred and feathered” look featured in most artwork depicting feathered dinosaurs at the time.  Looking at them now, Willoughby’s old Deinonychus illustrations still have significant issues with them, but at the time, they were the first paleoart I’d seen that didn’t make feathered raptors seem inherently laughable.  Having finally realized that maybe the concept wasn’t so stupid after all, I began to pay more attention to the actual fossils, which quickly put the lie to creationist rhetoric on the topic. 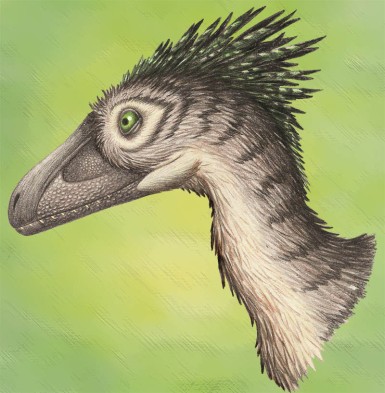 As the smooth gradient between bird and dinosaur gradually became clearer to me, I finally had to admit that evolutionary theory not only accounted for this, but also so many other variables far better than the hodgepodge of contradictory ad hoc deflections I’d grown up with ever had.

It feels like coming full circle in a way, and I am only too pleased that the person most responsible for breaking me out of my pseudoscientific bubble contributed to one of my favorite books to recommend to people looking to do the same.  (All the better then that I got a signed and doodled copy straight from Willoughby herself!)  I’ve talked about God’s Word or Human Reason? to just about anyone willing to listen to me jabber about it.  I even had the privilege of meeting Dr. Mary Schweitzer at a Dallas Paleontological Society meeting a couple years ago, and brought my copy along to show off to her!

As her discovery of unfossilized soft tissue in tyrannosaur bones has made her a lightning rod for creationist attention, I could see a brief look of exasperation flicker across her face at the sight of the title, followed by genuine interest once I explained the book’s purpose.  I hope I inspired this paleontological superstar to check it out for herself, but I am content to settle for you, dear reader.  God’s Word or Human Reason? is an absolute must-have for anyone with any interest in the creation/evolution controversy.  It’s well worth the purchase, and gets my enthusiastic Dino Dad Stomp of Approval! You can follow T. Michael Keesey and Emily Willoughby (along with myself!) on Twitter. Be sure to visit Willoughby’s online portfolio, and consider purchasing some of her art!