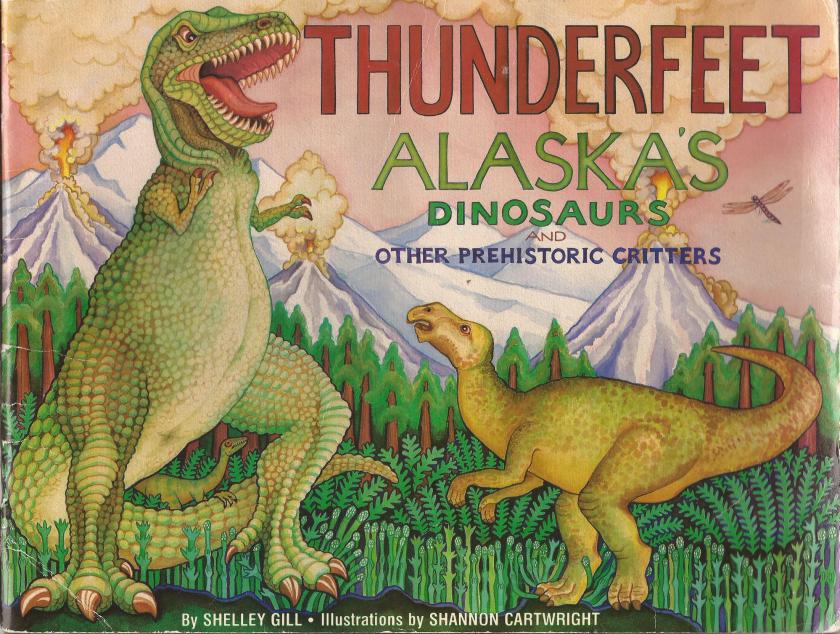 It’s another book review! Today’s review concerns “Thunderfeet: Alaska’s Dinosaurs and Other Prehistoric Critters“, by Shelley Gill, and illustrated by Shannon Cartwright. Now, most people don’t associate dinosaurs with Alaska, but it’s true! Dinosaurs did indeed roam the northernmost state of the U.S.A., though scientists didn’t have the clearest picture of them until recently. As the title suggests, this book isn’t a dinosaurs-only affair, though. The reader also encounters many of the Ice Age mammals which once roamed Alaska. (Actually, some of them still do! But read on…)

The text is segregated into two parallel tracks: one which delivers structured, rhyming prose on the left-hand side of the page that makes for some enjoyable story-time reading, and another on the right-hand side that delivers more in-depth information about the creatures and concepts discussed on each page. I liked that the book did not simply present us with an grab-bag of random animal facts, but intentionally worked to instill in the reader a sense of the changing earth, even delving into a brief description of the Bering Land Bridge (which I shall discuss further in the art section. The dinosaurs are unfortunately subjected to an incredibly generic treatment, even going so far as simply referring to the resident hadrosaur and ceratopsian as, well, “Hadrosaur” and “Ceratops”. I say unfortunately, but it is entirely excusable, given that the study of Alaskan dinosaurs has only really taken off in the last decade or so. I’ll elaborate on the unique Alaskan saurians in the next section, as I discuss the illustrations.

I really like the artwork. It has a crisp, clear stylization that generally does right by its subjects… or at least the ones we have modern analogues for. The dinosaurs come out rather poorer than the mammals in terms of accuracy.

The text identifies a “smaller variety” Tyrannosaurus as the top predator of Mesozoic Alaska. Now, while I can’t fault a dinosaur illustration produced in 1993 for not possessing feathers, the scales on this critter come out looking rather wacky, like a cartoon dragon. Actually, speaking of cartoons, with that odd pattern around its head, it looks like a dead-ringer for the cobra-head bad guys in the old Dino-Riders show. What’s that? An obscure reference not all my readers may understand? GO WATCH THIS NOW. Ahem. Also, I hate to be that guy, but really it should just read “tyrannosaur”; since “Tyrannosaurus” refers to the specific genus that stalked parts of the Lower 48 and southern Canada. The Alaskan species is actually more closely related to the medium-sized tyrannosaurs Albertosaurus and Gorgosaurus, and after careful study of its fragmentary remains, has recently received its own name based on the local Inuit language: “Nanuqsaurus” (meaning “Polar bear lizard”).

Incidentally, the Alaskan hadrosaur pictured here gets several illustrations throughout the dinosaur portion of the book, but I only included this one to save space with a combo picture. It has also received its own Inuit-based name, Ugrunaaluk (I’m getting flashbacks to “The Legend of Korra”), though some have argued it doesn’t seem sufficiently different from Edmontosaurus to warrant its own genus name. The hadrosaur illustrations all come out looking fine; they seem to split the difference between Edmontosaurus and Maiasaura in terms of appearance. 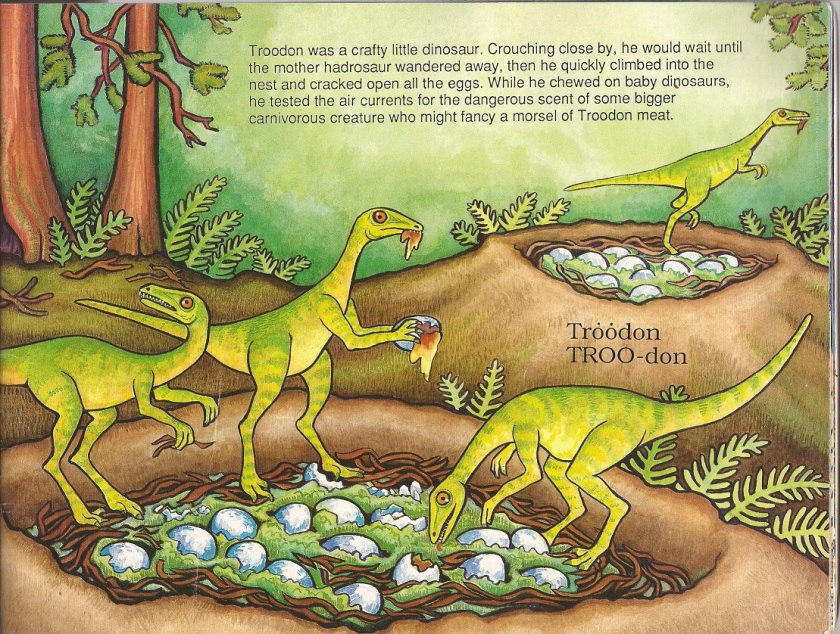 With Tröodon, we again see more unfeathered theropods, though again, I suppose I can’t fault a book of this age for that. My main concern is that it’s not immediately obvious there ARE Tröodon. Close inspection reveals they do indeed possess hyper-extended killing toes, but they don’t really stand out to the viewer, and their overall proportions somehow recall something more like Compsagnathus to me. I do like that the author added the old-fashioned umlauts to its name, which more recent publications have dropped, though she commits a typo in putting one dot over each “O” rather than two dots over the first “O”. 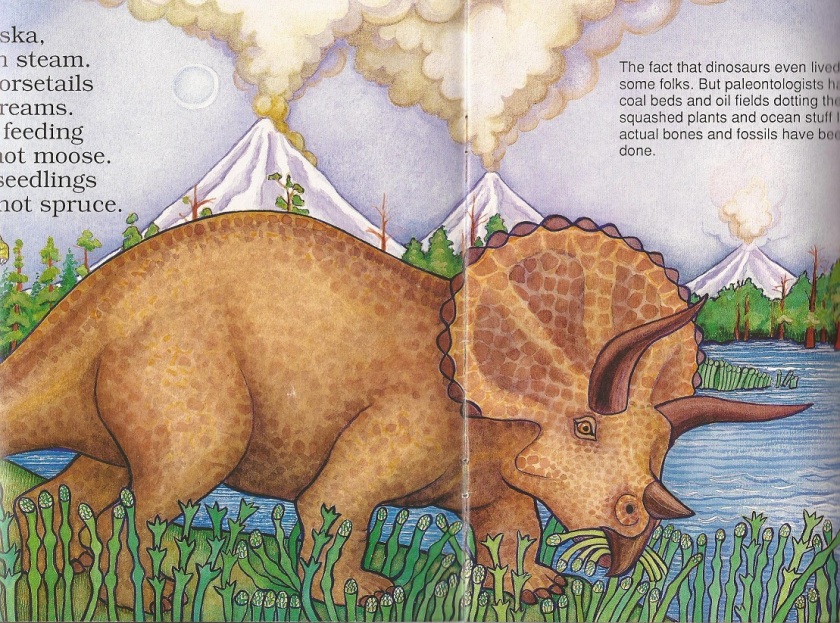 There’s not too much I can say about this Triceratops without getting rather technical; however, it’s moot anyway since Triceratops itself is not actually known from Alaska (as I mentioned before, though, the book attempts to hedge its bets by simply calling it by the more generic name of “Ceratops”). Though the author could not have known, scientists eventually identified the Alaskan ceratopsian as a northern species of Pachyrhinosaurus, P. perotorum. Unlike most of its relatives, this species actually had no horns on its face at all (except for a few little hornlets on its shield-like frill). Instead, it possessed large bony lumps known as “bosses” where one would normally expect to find horns in other ceratopsians.

There’s also a generic “Plesiosaur” that appears on the obligatory “death of the dinosaurs” page, but as the text makes no mention of it, there’s really not much to say about it. If you’re interested in learning more specifics about Alaskan plesiosaurs, I recommend researching Nakonanectes. Alaskan paleoartist James Havens has created several excellent works relating to this stout elasmosaurid plesiosaur for his Alaska Paleo-Project. While the original specimens come from Montana, Havens has based his reconstructions of Alaska’s plesiosaur fossils around this genus, so I’m guessing he’s privy to some special info regarding its identity.

The mammal illustrations far rather better, and feature in some of my favorite illustrations in the book. This excellent double-page spread of the Bering Land Bridge, for example, does an excellent job of conveying multiple concepts associated with the idea. We see the molten mantle driving the continents above into each other, raising up not only the land bridge, but also the incredible mountain ranges of Alaska to the right of the image. Meanwhile, some animals, such as mammoths and yaks, migrate into the Americas, while others, such as horses, migrate out to colonize the Old World. It’s a fantastic image for a children’s book such as this. The only thing I would’ve changed would be to add more species, such as camels migrating along with the horses, or humans along with the mammoths.

Speaking of mammoths, I was going to try to avoid these over-exposed pachyderms and feature more of the other animals instead, but I found this brushfire scene too striking to not include in my review. I like the sense of hurried movement conveyed in the animals, while the landscape feels appropriately dramatic for such a dangerous moment. 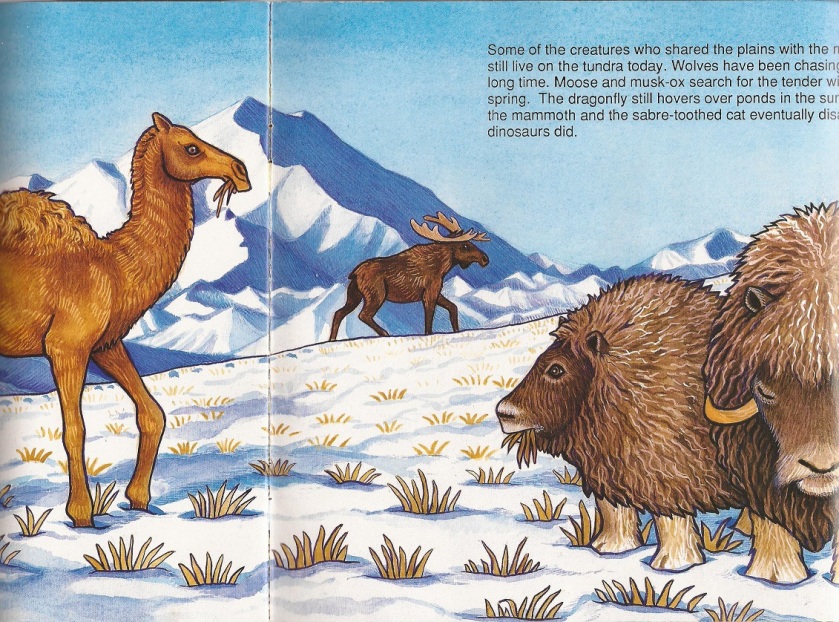 The full spread of this image is also quite lovely, but I wanted to focus in on the animals in this image to get a better sense of the art style which works so well for them (although I unfortunately ended up cutting parts of them off). The author and illustrator intend this scene to convey the fact that most of the animals we see in modern Alaska in fact lived right alongside the seemingly more exotic fauna we would associate with the Ice Age. Here we see an extinct American camel alongside moose and musk oxen. Actually, the history of the musk ox is a little more complicated than what I’ve implied here. When the first anthropologists began studying the natives of Alaska, they found that the oldest of them could remember living musk oxen, despite the fact that they were at that time locally extinct. All musk oxen that live in Alaska today were actually reintroduced from relict populations in Greenland and the islands of Canada’s Northwest Territories, making them among the first Ice Age animals to be “resurrected” into habitats they’d previously disappeared from.

There are many more delightful illustrations I could show you, but I don’t want to spoil the whole book for my readers, so I’ll close with the final image from the story, featuring a parade of all the animals featured in the book. One can see here how small and/or distant animals sometimes suffer a bit in quality in this book, but I still like this comparison image anyway. The text invites the reader to ponder our connection to the distant past, and how things have changed not only since then, but in our own lifetimes as well.

I really enjoyed the book overall; the dual texts allow the book to serve double duty as both light story-time reading, and more in-depth and as a more informative introduction to prehistoric Alaska. It’s a clever set-up that helps to extend the appeal of the book to a wider range of kids, including non-readers, early readers, and somewhat more advanced readers.

The dinosaur illustrations could have been better; in fact Greer Stothers blows the entire dinosaur section of this book out of the water with a single double-page spread in Kaleidoscope of Dinosaurs and Prehistoric Life. I like the artwork overall, however, which more than proves itself in the book’s better illustrations. I definitely recommend the book if you happen to come across it. However, I’m afraid I can’t quite go so far as to give it the “Stomp of Approval” due to its generic and outdated information about dinosaurs. I would normally give an older book like this a pass, but given that the theme is Alaska’s unique prehistoric fauna, and that I recently saw it still for sale at the airport bookstore in Anchorage, I feel that it may be a bit overdue for an update in order to live up to its full potential. I don’t mean to sound too down on it though; like I said, I really do enjoy “Thunderfeet “, and heartily recommend it!

Join us next time as I review “Thomas ‘T’ Rex, and the Case of the Angry Ankylosaurus“!

P.S., Special thanks to “Love in the Time of Chasmosaurs” for mentioning my blog not once, but twice in their monthly round-up posts! I’m flattered by the attention from one of the big names around the Dinoblogosphere! If you haven’t heard of LITC before, go check it out. Their “Vintage Dinosaur Art” series was a huge influence on the nature of this whole Dino Dad project. Additionally, the list of paleontology-related blogs they maintain is one of the best on the web, so they’re a good place to start if you want to dig deeper into the world of paleontology (they’re probably directly responsible for the current extent of my paleo knowledge!). I actually already have an LITC-related book in the pipeline waiting for review, so keep an eye out for that one in the future!