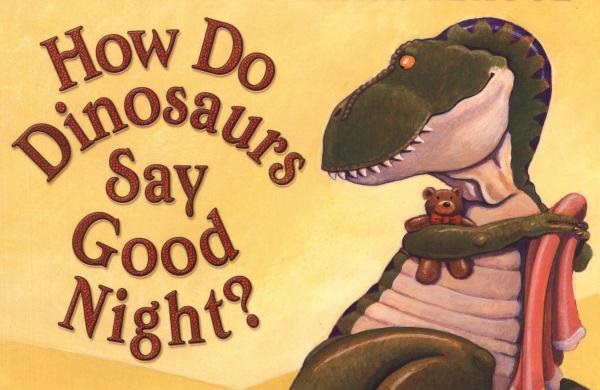 Welcome back to Dino Dad Reviews! In this post I will be reviewing “How Do Dinosaurs Say Good Night?”, written by Jane Yolen and illustrated by Mark Teague.

(For the video version of this review, click here to visit the Dino Dad Reviews YouTube channel! For the Christmas version, check out my review of How Do Dinosaurs Say Merry Christmas?)

Like “Dinosaur Roar!”, this book doesn’t really focus on the dinosaurs themselves, but rather uses them as a narrative prop for an exploration of good and bad bedtime behavior. In this story, the dinosaurs, apparently standing in for human children imagining themselves as such, react as their (human) parents tell them to head to bed. The book shows how they COULD throw temper tantrums, but affirms that really they know better, and that the night always goes better when one heads to bed without a fuss. 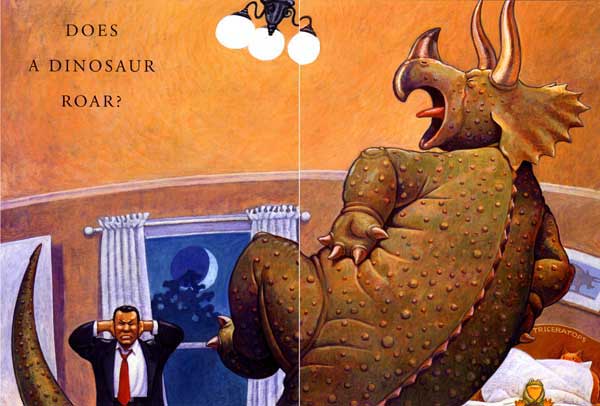 The rhyming prose is clear and pleasant to read, although the rhythm gets thrown off in a couple places. The book works well whether read aloud to a younger child, or as a beginner book for an older child learning to read.

The illustrations are highly stylized, and while I would not call the dinosaurs at all realistic, neither are they quite as cartoony as Dinosaur Roar. Overall, Teague’s style reminds me of William Joyce, whose own picture books I have always personally enjoyed. (Joyce’s “Dinosaur Bob” shall certainly appear on this site at a later time.)

As Teague renders his subjects in an intentionally stylized manner, but still manages to make them recognizable, I don’t have much negative to say about them. The Ankylosaurus appears in its 1964 World’s Fair, Sinclair Oil form, but as its true appearance was always a bit vague until the last couple decades, I find that perfectly acceptable. The Trachodon strikes as a bit more odd. It has the right general shape and a proper duck bill, but possesses sharp claws and pointy, protruding teeth. I’m not quite sure why the illustrator chose to endow an herbivore with such attributes! 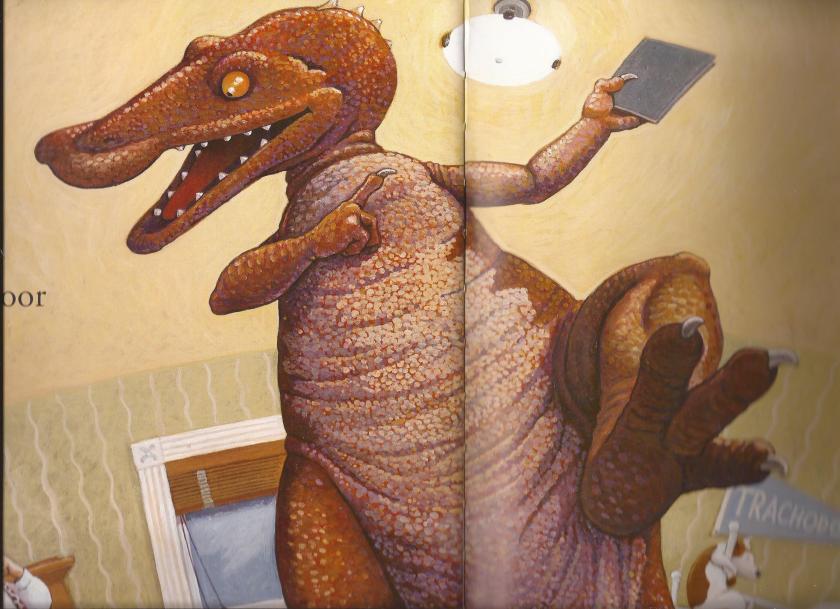 Overall, I really enjoy this book, and give it the Dino Dad Stomp of Approval. It helps my little one accept his own bedtimes a little more readily, and I always find it an easy read. Do yourself a favor and buy it for your own little ones! Be sure to check out other entries in the “How Do Dinosaurs…” series as well. I’ve also reviewed How Do Dinosaurs Say Merry Christmas? on this blog as well!