I’ve got a special review for ya’ll today of something that’s almost more an activity than a book! The Nature Timeline Wallbook (and its previous edition, Wallbook Timeline of Nature), published as part of the What On Earth? Timeline series, teaches kids about the history of life on earth, from the first appearance of life just after the Hadean Eon up to the present day. Why not pull up Ages of Rock for some mood music in another tab while we dive in?

The book accomplishes this in an unorthodox way by folding out to about 2 meters (over 6 feet) in width! It divides the entire stretch into the various time periods and epochs, with the appropriate plants and animals appearing in their respective eras. A little blurb accompanies each creature, giving the reader a brief introduction to them.

Now once you actually unfold the timeline and have had some time to admire the illustrations, you will notice the rather small font size of the text. This can prove a challenge even to young eyes. Fortunately, the creators of the book anticipated this, and included a nifty little card-shaped, plastic magnifying glass. It really proves quite useful in avoiding the fatigue that comes from squinting at such tiny letters! It’s also nice to see many of the illustrations in a larger size. My boys have great fun putting the magnifying glass to good use in other projects as well, quite unrelated to the timeline book itself.

Speaking of the illustrations, the timeline really stuffs itself to the brim with as many creatures as can possibly fit! The boys and I have fun making a “seek and find” sort of game out of it, hunting for specific animals they recognize. While rendered in a cartoony style, the animals generally look pretty accurate for the most part. A few of the animals are a little off: for example the Edaphosaurus that doesn’t really look any different from the Dimetrodon above it, and the funky feathering on some of the theropods. But taken as a whole, these are relatively minor issues when examining the whole 6 foot spread.

In addition to the timeline, the book brings some additional fun with a faux newspaper included in the back called “The Wallbook Chronicle”. It contains a series of articles written as though they are contemporary news reports of important moments in the history of science, especially as relates to the concept of natural history, though other subjects also get coverage. The articles make for some fun light reading, and often contain some fun science and pop culture jokes.

As I mentioned, there are two editions of this book, which as best as I can tell, are nearly identical apart from the covers. The only significant change I found inside was in the newspaper, which sees a crossword puzzle in the old version replaced by an additional news story about the first human embryos developed from three parents (father’s DNA, mother’s nuclear DNA, and donor mitochondrial DNA).

The Nature Timeline Wallbook has proved an instant hit in our home. My boys just love pulling the timeline out and spreading it out over the floor. It does have perforations allowing for easy detachment, presumably to hang on the wall, but we have more fun with it on the ground, as the little ones enjoy walking around it to view from multiple angles. I’m glad that it holds their interest already, and that they can grow into it as their reading comprehension expands. Although the few inaccuracies bother me enough that I just barely can’t give this the full Stomp of Approval, I nevertheless recommend this very highly! You should consider getting a copy for your own home! 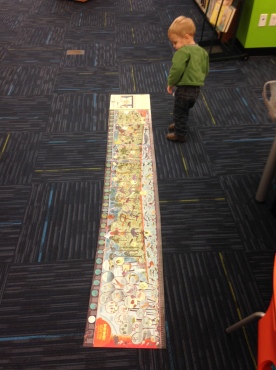